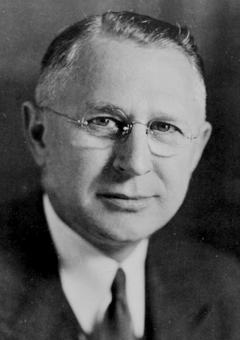 Raymond Fogler received a bachelor’s degree in biology from UMaine in 1915 and an honorary LL.D. in 1939. He began his business career as an assistant in the Agricultural Extension Service, then worked with the W.T. Grant Co., eventually becoming vice president. He then served as vice president and director, and later president, of Montgomery Ward Co. In 1940, he became president and director of the W.T. Grant Co. He was assistant secretary of the U.S. Navy, director of commerce and industry of New York, past president of the General Alumni Association, the New York Alumni, and a Trustee representative and president of the University of Maine Foundation. From 1957–63 he was president of the University of Maine Board of Trustees. His four sons and three daughters are all UMaine graduates.