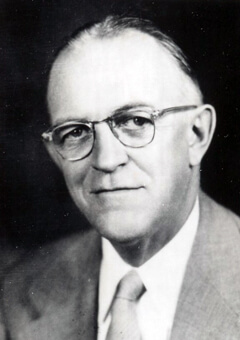 Dwight B. Demeritt began working in the university’s forestry department in 1923 at the recommendation of Clarence Cook Little, who served as  University of Maine president from 1922–25. Demeritt was the head of the Forestry Department from 1934–45 and vice president and woodlands manager for the Dead River Company and Eastern Corporation of Bangor until his retirement in 1963. He died in 1972. The Dwight B. Demeritt University Forest was named for Demeritt in 1971 in recognition of his work to procure the land for the University of Maine. Four tracts of government land near UMaine — almost 2,000 acres — were acquired by lease in 1939 and then by deed in 1955, with the intention of being managed by the Forestry Department.