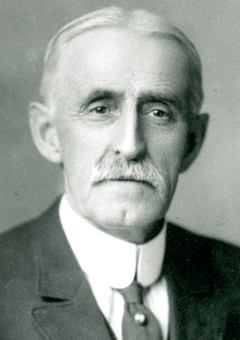 Edward Winslow of Portland was on the University of Maine Board of Trustees for 13 years, serving as its president from 1907–11. The Westbrook native lived in Portland and was identified with many commercial and financial activities in the city. At one time or another he was president of Central Wharf Towboat Co., Casco Bay Lines, Mercantile Trust Co., and Eastern Argus Publish Co., and director of such companies as Maine Central Railroad, Portland Terminal, New England Telephone and Telegraph, as well as the Maine Eye and Ear Infirmary and Maine School for the Deaf. He was even nominated for governor in 1896. In 1932, he received an honorary master of arts degree from UMaine.