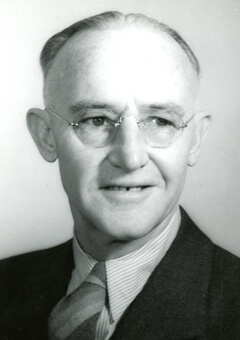 E. Reeve Hitcher joined the faculty of the University of Maine in 1922, following his graduation from Pennsylvania State College with a master’s degree in bacteriology. In 1933, he was appointed head of UMaine’s Department of Bacteriology and served as professor of bacteriology. He remained head of the department until his retirement in 1959. At the time of his retirement, the academic building housing bacteriology, biochemistry and poultry science was named Hitchner Hall in recognition of his leadership, scholarly activity and contributions to Maine and its people.