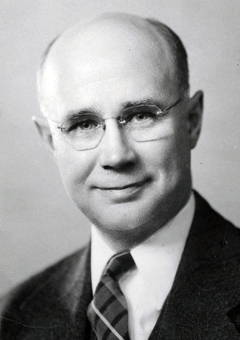 Arthur Deering headed the University of Maine’s College of Agriculture for nearly 20 years, retiring in 1957. He also directed the Extension Service of the university. In 1935, Epsilon Sigma Pi, a national honorary society, gave him a certificate for an “outstanding record of service to Maine agriculture.” Born on a farm in Denmark, Maine, Deering graduated from the University of Maine in 1912, and received an honorary degree from UMaine in 1934. A former Kennebec County Extension agent, Deering was named assistant director of Extension in 1927, director in 1930 and, in 1933, became dean of the Agricultural College.