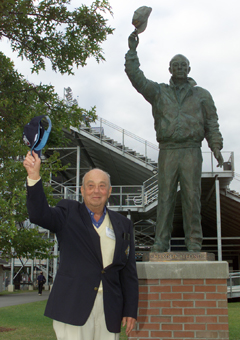 Harold Alfond of Waterville, owner of Dexter Shoe Co., was a philanthropist, humanitarian and sports enthusiast who was the driving force behind the construction of both Alfond Arena and Alfond Stadium. In 2011 Alfond Arena was deemed “the best atmosphere in college hockey” and Alfond Stadium has been the proud home of Black Bear Football since 1999. A loyal supporter of the university and the state, he and his family foundation have donated more than $19 million to UMaine since 1968. Harold Alfond was awarded an honorary Doctor of Human Letters degree by the University of Maine in recognition of his many contributions to education.  The Harold Alfond Foundation has continued to provide generous support for UMaine Athletics and other needs on campus since the philanthropist’s death in 2007.