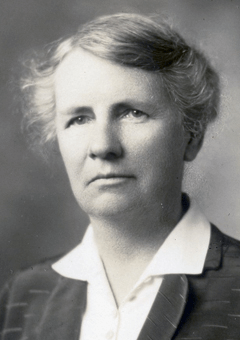 Caroline Colvin was a history professor at the University of Maine starting in 1902. She served as the department’s chairperson from 1906–32 and may have been the first woman in the country to lead a major university department. She also was one of the first women in the country to have a Ph.D. When Colvin was Dean of Women from 1923–27, she worked to consolidate and strengthen the position of women on campus. After a new gym was built, women took over the former gym and a Women’s Student Government was formed. She began to call for more dormitories, and President Clarence Little helped her cause. When the first of the new dorms was built, it was named Colvin Hall.