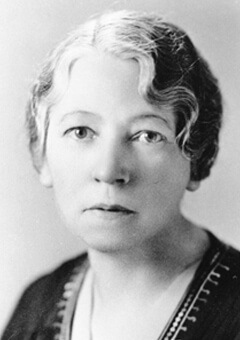 Edith Patch was a major figure in entomology at UMaine from 1904–37. She earned a Bachelor of Science degree from the University of Minnesota in 1901. She was interested in both science and writing, but could not find a job in science until 1903 when Charles Woods of the Maine Agricultural Experiment Station invited her to organize a Department of Entomology at UMaine. Woods offered her no salary but arranged for her to teach English for a living wage. He received criticism for appointing a woman in what was considered a man’s field. Within a year, Patch established the department and earned a salaried position. She also wrote about 15 books and 78 major articles, including a three-volume work on the aphid. “Food Plant Catalogue of the Aphids of the World” is regarded as one of the most outstanding scientific contributions made by an Orono resident. Patch earned a master’s degree at UMaine in 1910 and a doctorate from Cornell University in 1911. She was elected the first woman president of the Entomological Society of America in 1930, and her knowledge of the potential dangers of pesticides was ahead of others in the field. Patch bought her Orono home, Braeside, in 1913 and made its gardens, fields and woods a living laboratory. She retired from UMaine in 1937 and lived at Braeside until her death in 1954.