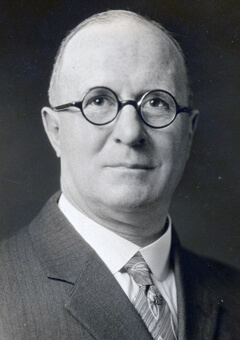 William Barrows graduated from the University of Maine in 1902, and taught electrical engineering. He received an advanced degree six years later. He served as head of the Electrical Engineering Department for 33 years, from 1912–45. According to the dedication pamphlet for the hall, Barrows is remembered “as a kind and considerate man, one who would quickly recognize the talents of others, and one ready to lend encouragement in developing a talent. Always sincerely interested in the welfare of young people, he advised them with care and thoughtfulness on all matters.” He authored a textbook on illuminating engineering that had appeared in five editions. He died in 1960.