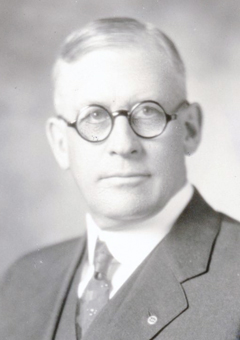 Harold Boardman, who graduated from UMaine with a bachelor’s and master’s degree in 1895 and 1898, spent more than 40 years actively associated with his alma mater. He graduated from the university in 1895 and began teaching engineering at UMaine in 1901. Two years later, he was named head of the Department of Civil Engineering and became dean of the College of Technology in 1910. He was the first alumnus to become a UMaine president, serving from 1925–34. Boardman was awarded an honorary degree from the University of Maine in engineering in 1922 — one of at least four he received from other institutions. Many of Boardman’s students in the early 1900s went on to become nationally known in engineering, working on such nationally prominent projects as the Boulder Dam and Grand Coulee Dam.