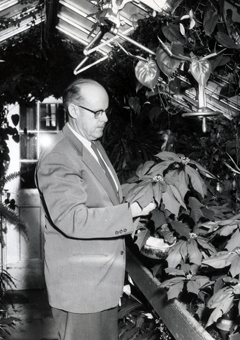 Roger Clapp, who served the University of Maine for 40 years as a teacher and landscape designer, earned a master’s degree at the university. His thesis centered on the distribution and hardiness of landscape plants in Maine and helped expand the use of less well-known plants in landscape designs throughout the state. His time was equally divided between teaching and creating the landscaping for most campus buildings built between 1940 and his retirement in 1969. After his retirement, he continued to direct the planting and maintenance of the flower beds on campus. His services to the university were recognized in 1969 by the UMaine Alumni Association with the Black Bear Award.