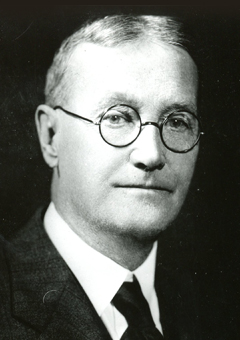 James Stevens came to the University of Maine, then known as Maine State College, as professor of physics in 1891. Stevens established UMaine’s Department of Electrical Engineering in 1893, became the first dean of the College of Arts and Sciences in 1905, established a course in biblical history literature in 1920, and was instrumental in establishing a chapter of Phi Beta Kappa on campus. He was director of UMaine’s Summer School and editor of the University Catalog. He received an honorary doctorate degree from UMaine in 1922 and retired in 1932.