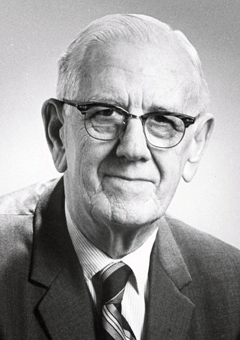 Charles Crossland received his B.S. from the University of Maine in 1917 and was associated with UMaine until his retirement in 1981. During that time, he served as executive secretary of the Agricultural Extension Service, Extension editor, alumni secretary of the General Alumni Association, acting business manager, director of student and public relations, assistant president, acting president of the university and vice president for administration. After his retirement from university administration in 1961, he received an honorary doctor of laws and became the executive secretary of the Pulp and Paper Foundation. He also served as president of the Class of 1917.