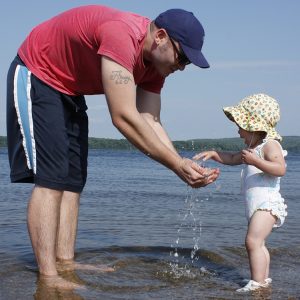 Widespread occurrence of miniscule plastic fragments (i.e., microplastics) in natural waters around the world is an imminent threat to ecosystem and public health. In Maine, microplastic pollution is especially concerning because the state is one of the largest producers of fish and shellfish in the nation and seafood consumption could contribute to microplastic ingestion.

More than a century of logging and other industrial practices have led to substantial freshwater habitat alterations in Maine streams and rivers, damaging suitable habitat for many fish species including endangered Atlantic salmon. As part of a restoration plan for a section of the Narraguagus River in Washington County, Maine, researchers will study the effects of river structures added to enhance habitat and the interactions between these structures and river ice and stream flow. They will also collaborate with experts to improve the design of engineered log jams that will be constructed in August 2022.

Maine’s rivers and streams are home to twelve native species of sea-run (diadromous) fishes, which migrate between freshwater and marine environments to complete their life cycles. These species provide ecological linkages between freshwater and marine biomes and have cultural, social and economic value to the Indigenous and non-Indigenous people of Maine. The Telling Our Story Workshop series is a participatory and collaborative endeavor to understand and address the communication and outreach needs of sea-run fish practitioners in Maine. In this project, participants will work collaboratively to identify audiences and begin developing messages to motivate action in support of sea-run fish conservation, restoration and management, forming the basis for continued collaboration among sea-run fish partners.

Marine ecosystems and the human communities that depend on them are complex and dynamic social-ecological systems and knowledge of these dynamics is needed to sustain both ecological and human communities. Yet fine-scale data relevant to specific places are often lacking. The University of Maine Darling Marine Center (DMC), in partnership with the Damariscotta-Newcastle Joint Shellfish Committee and Lincoln Academy, is developing a community science research program in the Damariscotta River Estuary. The team is working with local scientists, students, educators, harvesters, and municipal leaders to collect information on shellfish and document how the estuary is changing.

Shellfish are filter feeders that pump water through their bodies and consume algae they have flltered from the water, some of which can be toxic to humans. The biotoxins found in some algae can accumulate in shellfish, and humans can become sick when they ingest the shellfish meat. The algae reproduce (or “bloom”) when environmental conditions are favorable, creating a Harmful Algal Bloom (HAB) event.

The toxic diatom Pseudo-nitzschia is an algae species that produces a biotoxin that causes  Amnesic Shellfish Poisoning (ASP), with human health effects that can include short-term memory loss, gastrointestinal problems, and even fatality.

We’re All in This Together: Participatory Planning for Community-Based Climate Change Adaptation

Vacationland. Take one look at Maine’s license plate and you see the widespread importance of tourism to the state. Maine’s natural resources attract visitors from all over the world but are also vulnerable to climate change, which is likely to impact visitors as well as communities dependent on tourism. This project seeks to move beyond traditional power structures and collaborate with community partners to co-develop locally relevant, useful climate change solutions. The result of this collaboration will be a participatory framework to build climate-planning capacity within tourism-dependent communities.

The Maine lobster fishery is among the most valuable commercial fisheries in the United States and supports thousands of jobs in coastal communities across the state. Yet it also faces serious challenges related to climate change, trade and marine mammal entanglement. Although there are multiple monitoring programs that are used to track the status of the lobster resource in Maine, no equivalent system exists to understand the status of the lobster industry. The intent of this research is to develop “sentinel” indicators of resilience for the lobster industry that can be used to detect early signs of vulnerability.

The research and engagement of Collaborating Toward Climate Solutions (CTCS) is designed to support on-the-ground problem-solving for the complex challenges that communities face with climate change. The research team is working closely with community partners to co-develop strategies and extension/assistance services to foster adaptation and resilience. This includes learning about community priorities and challenges and identifying potential service-provider partners, best practices, and the potential for networks that enable towns to connect with peer communities.

There are major public health issues associated with pathogens entering shellfish growing areas across the Maine coast. Storm-related pollution poses significant and poorly anticipated threats to public health with real economic and cultural consequences. The research team is collaborating with the Maine Department of Marine Resources and commercial partners to analyze the storm-pollution link, expand the analysis to include more potential pollution factors, and provide improved, location-specific decision support for pollution-based harvest regulation. The intent of this collaboration is to reduce unnecessary closures and allow for earlier safe re-openings following closures with no added risk to public health.

In January 2017, the Mitchell Center launched the Strengthening Coastal Economies project as part of the Diana Davis Spencer Partnership for a Sustainable Maine. The ultimate goal of this initiative is to develop, implement and evaluate solutions to complex problems requiring a careful balance between economic development and environmental preservation.

The Coastal Maine Estuaries (CoMEE) Response to Freshwater Runoff project aims to enhance the scientific basis for predicting the response of coastal Maine estuaries to polluted freshwater flows. This collaborative effort will build on the knowledge base and framework created under the New England Sustainability Consortium’s (NEST) Safe Beaches and Shellfish Project.

This project is designed to refine and advance the knowledge and understanding of coastal watershed-estuary systems initiated by the NSF funded “Safe Beaches and Shellfish” project led by the collaborative New England Sustainability Consortium (NEST). The Safe Beaches and Shellfish project’s goal was to equip resource managers to make better science-based decisions about the closure of beaches and shellfish beds in response to bacterial pollution problems.

Developing a protocol for use by volunteer citizen scientists in conservation organizations to monitor the erosion of Maine shell middens—human-created accumulations of mollusk shells, fish, mammal, and bird skeletonsrtifacts such as bone and stone tools—that archive 4,000-plus years of cultural and environmental data.

Understanding the barriers and opportunities for integrating and sharing data from disparate sources is critical to create more usable knowledge that fits within existing social and political structures.

Ecosystem-based fisheries management (EBFM) has been widely touted as the future of fisheries conservation and stewardship, appearing prominently in an array of highly visible policy documents in the United States and internationally.

Led by the University of Maine and the University of New Hampshire, the New England SusTainability Consortium (NEST) is a regional research partnership focused on strengthening the scientific basis for decision-making regarding the management of coupled coastal systems…

Ocean and Coastal Acidification in Maine

Ocean and coastal acidification (OCA) presents a unique set of chronic sustainability challenges at the human-ecological interface along the coast of Maine. It threatens the livelihoods of coastal communities through its current and future negative impacts on commercially important species such as oysters, clams, and lobsters and the delivery of ecosystem services like controllng climate and disease.

Bycatch, or the incidental catch of non-target species, represents both an ecological and social problem in fisheries management. The decision of fishers to keep or discard bycatch caught in a targeted fishery is based on a fisher’s knowledge, understanding, and attitudes…

This project explores the ways in which existing formal and informal institutional arrangements enable or impair the implementation of ecosystem-based management of marine fisheries in eastern Maine. The conceptual approach is multiscale but with a strong emphasis on local institutions because they tend to be absent or less robust than State or Federal institutions engaged in the management of these resources…

Renewable Energy from the Tides

Maine is one of the most promising places in the world for tidal power. This SSI research team is helping ensure that tidal power is developed in ways that promote economic development and protect marine ecosystems as part of the Maine Tidal Power Initiative…

Quality of Place in the Saco River Estuary

After several decades of clean-up efforts, the Saco River Estuary is coming back to life. Surrounding communities are now turning to the estuary as a source of renewal and economic development, but new pressures are emerging, including increasing coastal development…

Many sustainability solutions are designed or enhanced by developing and siting new technologies (e.g., reducing greenhouse gases by generating power using wind energy). Yet the impact of these newly sited technologies on the quality of life of local residents and on tourism can be incredibly difficult to envision…