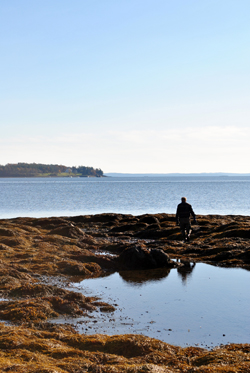 The Safe Beaches and Shellfish Project is the first project of the New England Sustainability Consortium (NEST). NEST began in 2013 as an ambitious effort to build research capacity by integrating strengths of multiple small universities and colleges in Maine and New Hampshire and by combining and growing these strengths through new collaborative research partnerships. With the addition of a second project in 2015, The Future of Dams, NEST has expanded to include Rhode Island institutions.

This Safe Beaches and Shellfish Project addressed water quality and public health issues of importance to many coastal communities regionally and nationally.

A conceptual model brought together the social-ecological systems research focused on sources, delivery, and residence time with parallel consideration of factors that influence connections between scientific knowledge and decision-making. This conceptual model served as an important boundary object to coordinate across six different disciplines spanning the natural and social sciences: hydrogeomorphology, environmental communication and sustainability science, marine biology and oceanography, microbiology, spatial information sciences, and macro-ecology. 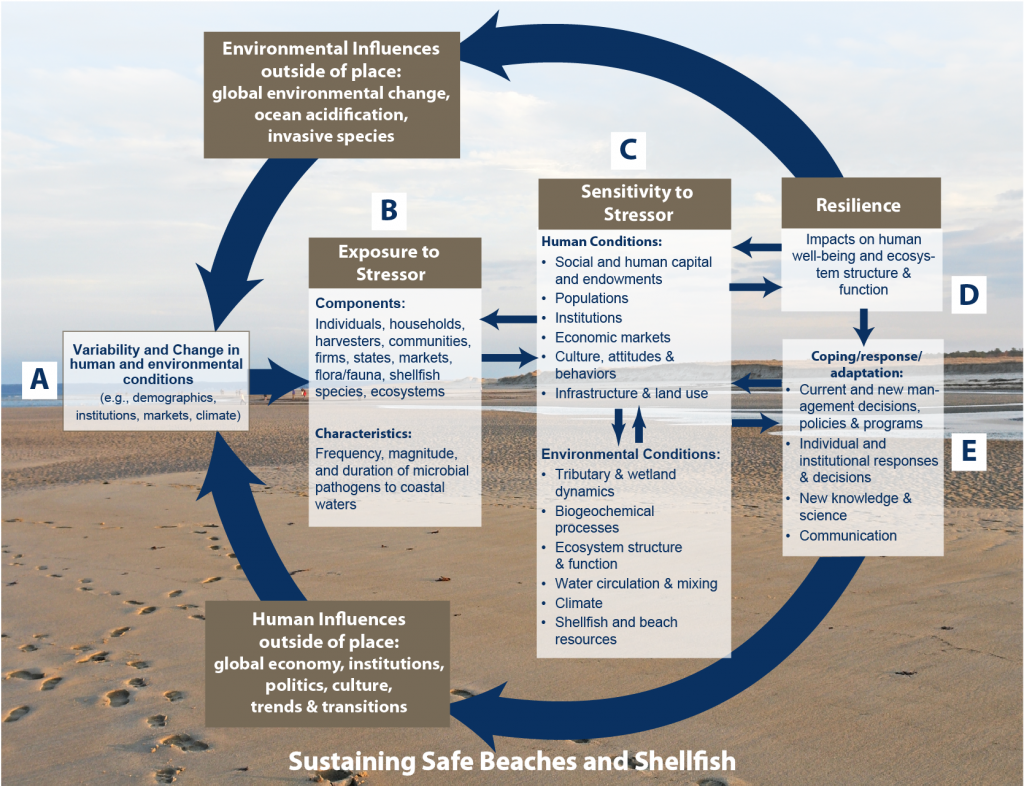 To prevent human illness from pathogenic Vibrio species affecting shellfish methods were developed to detect the actual pathogenic strains of Vibrio species and a patent application was filed for a new assay to detect V. parahaemolyticus in oysters. Forecasting models of the incidence and concentrations of pathogenic vibrios in regional shellfish harvest areas were developed to inform harvest management practices to reduce risks of vibrio-borne illness associated with raw shellfish consumption.

A model for prediction of watershed microbial contamination along the Maine coast, including a new high-resolution topographic map of the coastline delineating boundaries of watersheds and drainage networks, was developed. A hydrodynamic and particle tracking model was developed with stakeholders to enable investigation of estuarine parameter space with different combinations of environmental forcings.

At the conclusion of the project in July 2016, 42 peer-reviewed publications had been published and 25 manuscripts are in review or development. Thirty-two competitive, peer-reviewed awards had been received, representing $30,235,968 in follow-on funding to extend research efforts initiated by the project. 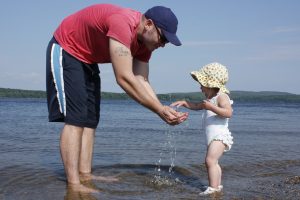 The Safe Beaches and Shellfish Project supported research that is relevant to diverse coastal decision makers by providing analyses, information, data, and models and building shared research capacity. Researchers and stakeholders collaboratively refined the questions, methods, and the identification of potential solutions, such as the development of the DSS and the identification of management trigger levels for beach and shellfish bed closures. Research data is publicly available on the NH EPSCoR Data Discovery Center (https://ddc.unh.edu/). Relationships were developed or strengthened with stakeholders from 35 state agencies, municipalities, non profit organizations and businesses.

Developing a cadre of young scientists with a strong disciplinary foundation as well as interdisciplinary sensibilities is a focus of NEST. Students collaborated with scientists from different disciplines and interacted with key stakeholders to better understand how sustainability science can help inform and address coastal environmental concerns. This project provided training for six post-doctoral associates, 41 graduate students and 53 undergraduates, across eight institutions. 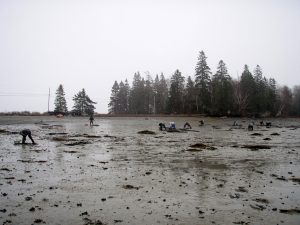 Cross-disciplinary courses on applied sustainability science were offered to students in both states via real-time videoconferencing. Keene State College developed a new academic course focused on genomic analysis, including a novel bioinformatics class for both biology and computer science majors. University of New England students were trained on methods for conducting stakeholder engagement in the context of sustainability science within an undergraduate curriculum.

Academic research partners for NEST in Maine include:

Academic research partners for NEST In New Hampshire include:

Supported by National Science Foundation award IIA-1330691 to Maine EPSCoR at the University of Maine.