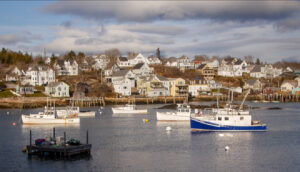 Increasing understanding of resilience and vulnerability in a vital Maine fishery.

The Maine lobster fishery is among the most valuable commercial fisheries in the United States and supports thousands of jobs in coastal communities across the state. Yet it also faces serious challenges related to climate change, trade and marine mammal entanglement. Although there are multiple monitoring programs that are used to track the status of the lobster resource in Maine, no equivalent system exists to understand the status of the lobster industry.

The intent of this research is to develop “sentinel” indicators of resilience for the lobster industry that can be used to detect early signs of vulnerability. For this project, resilience is defined as “the ability of groups or communities to cope with external stresses and disturbances as a result of social, political and environmental change,” based on previous research by Adger et al. (2001).

The research team is using a modified version of a peer-reviewed method (Jacobs et al. 2010) that provides a structured process for identifying, evaluating and validating indicators. This method was chosen because it is a widely used approach for developing indicators in fisheries.

The process includes the identification of variables that contribute to resilience and vulnerability in the lobster industry. For example, one such variable might be the number of fishing trips that are being taken in a given time period. A shift up or down could signal a change in the profitability of the fishery. The focus of this work will be on near-real-time data streams (i.e., those that are generated on short time intervals such as daily, weekly or monthly).

The success of this project relies heavily on input from the lobster industry — including those engaged in supporting the sector — and represents a collaboration with the Maine Department of Marine Resources, Maine Center for Coastal Fisheries, and Maine Lobstermen’s Association.

This project aims to support state- and community-level management and planning. It also responds directly to the call for the creation of social metrics for the lobster fishery that is highlighted in the 2019 Review of the Atlantic States Marine Fisheries Commission Fishery Management Plan for American Lobster. The need for sentinel indicators of resilience in fisheries is not unique to the lobster fishery and could be employed in other fisheries in New England and beyond.