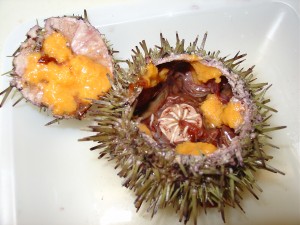 Sea urchin gonads are considered a delicacy in many cultures, especially Japan, which  is by far the largest consumer.  About 9,000 tons of sea urchin gonads are consumed in Japan every year.  A favorite Japanese sea urchin dish is uni, often served in sushi restaurants and as a holiday treat.  In the 1980’s  green sea urchin populations exploded in the Gulf of Maine, leading to a large and important fishery to supply Japanese demand.  When the fishery peaked in the 1990’s at about 40 million lbs and $40 million, it was second only to Maine’s lobster fishery.  Sea urchins here in Maine and elsewhere have proven to be vulnerable to over fishing, and as catches declined interest in sea urchin aquaculture grew.  The foundation for sea urchin aquaculture, especially hatchery techniques for reseeding fishing grounds, was laid in Japan in the 1970’s.  Several countries now have aquaculture programs for sea urchins, including Japan, China, Norway, Ireland, and the US.  In Maine, the first sea urchin hatchery was established  around 1998 by the Peacock Cannery in Lubec, and another hatchery in New Hampshire was established at about the same time by Larry Harris of the University of New Hampshire.

The Center for Cooperative Aquaculture Research began our sea urchin aquaculture program in 2005, working with Larry Harris and industry partner Jim Wadsworth of Friendship International on a nursery cage trial.  With funding from the Maine Aquaculture Innovation Center we built a small hatchery in 2006 and started producing our own seed.  In 2009, we carried out a three year study of sea ranching and land-based grow-out of sea urchins, with funding from the Northeastern Regional Aquaculture Center.  In 2012 we were funded through the NOAA Sea Grant Aquaculture program to study ways to improve sea urchin gonad yields and quality. Throughout  these projects we worked with Friendship International, a company that once specialized in shipping live urchins from Maine to Japan.

Our program has worked on sea urchin brood stock conditioning, sea-cage nursery methods, diet and nutrition, and grow-out to market.  Although the development program has been scaled back from previous years, our  hatchery is still in operation and available for either industry projects or restocking.   We are currently working with two small companies on sea urchin projects.  One company is in the early stages of testing cage designs for on-growing sea urchins at a Limited Practice Aquaculture lease (LPA).  The other company, Ocean Resources, plans on planting out a  bottom lease in 2016 with hatchery juveniles, to provide a year-round supply of urchins for the biological supply market.