Green sea urchins in the wild are omnivorous, eating a wide variety of plants and animals that they grind up with their powerful jaws.  These jaws are arranged in a circular plate  known as Aristotle’s lantern, located on the underside of the test (shell).  The preferred food of green sea urchins is algal species of kelp such as Saccharina and Laminaria, and researchers and growers around the world working with other sea urchin species usually use kelp and other macro-algae as feed.  In some cases the macro-algae may be farmed, but usually it’s collected from the wild

Macroalgae has several drawbacks as an aquaculture feed for sea urchins.  It is seasonally variable and relatively low in protein, and it can introduce unwanted organisms into the culture environment. Because macro-algae is usually >90% water content, large quantities are required for feeding.  Researchers who study sea urchin nutrition have seen that in most cases, formulated feeds out-perform macroalgae as a diet.  Many believe that successful commercialization of sea urchin aquaculture will only be possible when appropriate and cost effective manufactured diets are available.  The CCAR has carried out several diet and nutrition trials since 2008 as part of our green sea urchin development program.

Protein & Carbohydrate Levels in Juvenile Sea Urchin Diets Our first sea urchin diet trials were in 2008-09, carried out by University of Maine graduate student Ashley Kling for her thesis work.  Juvenile urchins reared from our hatchery were fed either kelp, a commercial abalone feed, or one of nine sea urchin diets formulated by Dr. Addison Lawrence of Texas A&M and Dr. Stephen Watts of the University of Alabama, Birmingham.  The formulated diets differed in protein/carbohydrate ratios to help us determine: 1) an optimum protein/carbohydrate ratio; 2) whether the formulated diets resulted in better growth than the kelp diet; and 3) whether a commercial abalone feed could also serve as a sea urchin feed.

Some of the study’s findings were published in the Journal of the World Aquaculture Society, which can be read here: Eddy, Brown and Kling 2012 green sea urchin feeding trials

In general, the results showed that diets with a protein content of 16% – 20% and carbohydrate content >40% resulted in the best growth.  Most of the formulated diets out-performed kelp, but the abalone diet gave the poorest results.  The formulated diets also caused precocious gonad development, raising questions of energy allocation and gonad quality.  The effect of diet on gonad yield and quality in green sea urchins was addressed in a subsequent study in 2012-14. 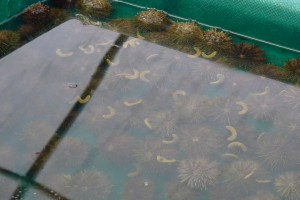 We carried out more nutrition and feeding trials from 2009 – 2012 during our project to evaluate grow-out of green sea urchins in tanks (Sea Urchin Growout Strategies).

During this project we used formulated feeds to grow hatchery  sea urchins to market.  Our primary feed was the Nofima diet, manufactured in Norway specifically for green sea urchins.  We also fed the urchins a low-cost catfish diet made by Cargill that was high in plant based proteins of terrestrial origin.  We compared the two diets  while also evaluating different feed rations and feeding frequencies on growth and survival.  We found that the catfish diet was adequate for short periods but over the longer term had negative effects on growth and health.  The Nofima diet resulted in relatively rapid growth of the sea urchins, while also producing highly desirable gonad yields and color.  The urchins could be fed as infrequently as once per week with little observed detriment to growth.  For more details please read the final project report here: Final report NRAC Sea urchin project

Diet can profoundly impact sea urchin gonad yields and quality aspects such as color, texture and taste.  This has obvious implications not just for aquaculture but also for the capture fishery, and as a result there has been considerable interest in Japan and elsewhere in determining optimum diets for gonad development.  In one form of echiniculture, sea urchins are held in cages or tanks for several months and fed high quality feed, which can be macroalgae or formulated, to improve their gonad quality.  This is known as gonad enhancement or bulking, and it can be likened to the practice of putting cattle on feed lots to fatten for market.

In 2012-15 and with funding from NOAA Sea Grant, we evaluated different rearing methods and diets for commercial bulking of green sea urchins in Maine.  The proposal can be viewed here: NOAA Sea Grant Urchin Proposal 2012

Working with industry partner Friendship International, we purchased a specialized sea urchin feeding system from Ireland called the Urchin Platter and installed it in a greenhouse at the CCAR.  University of Maine graduate student Kenn Ung Wei used the Platter system in a series of feed trials comparing different diets fed to hatchery reared or wild caught urchins.  Diets were freshly harvested kelp, dried kelp, or the Nofima diet made in Norway.  Gonad yield, water content, firmness and color were measured before, during, and after each six-month trial to evaluate diet effects on gonad quality.  The trials culminated in a taste sensory panel conducted by Dr. Mary Ellen Camire of the University of Maine Food Sciences Department. To see our presentation on the project given at the annual meeting of the National Shellfisheries Association in Monterey CA in 2015, click here: NSA Monterey 2015