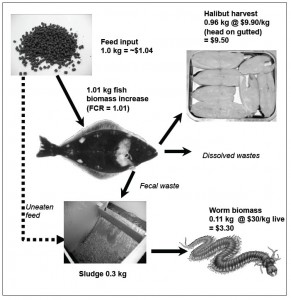 Integrated multi-trophic aquaculture, or IMTA, is similar to polyculture, where two or more organisms are farmed together.  In IMTA, multiple aquatic species from different trophic levels are farmed in an integrated fashion to improve efficiency, reduce waste, and provide ecosystem services, such as bio-remediation.  Species at the lower trophic level (usually plants or invertebrates) use waste products such as feces and uneaten feed from the higher trophic species (typically finfish), as nutrients.  The lower trophic species can then be harvested in addition to the fish to give the farmer more revenue, or even to be fed back to the fish.

IMTA has been the focus of worldwide research  because it is seen as a way to make aquaculture more sustainable and profitable on land or at sea.  An often heard criticism of finfish net pen aquaculture is that wastes and uneaten feed pollute the bottom under the pens and release nutrients such as nitrogen into the water, which in turn can fertilize algae blooms. In IMTA, other organisms that can use these wastes as nutrients are grown by the fish farmer in proximity to the net pens.  In a recent trial carried out in Canada by Cooke Aquaculture, kelp was grown nearby salmon net pens to utilize the nitrogenous wastes excreted by the fish.

The CCAR has worked on IMTA research since 2009.  In our first study, we captured wastes from a halibut tank system and fed them to marine worm beds in a series of raceways.  The worms thrived on the waste feed and feces and required only a minimal input of additional feed (see: Brown, N., Eddy, S., and S. Plaud. 2011. Utilization of waste from a marine recirculating fish culture system as a feed source for the polychaete worm, Nereis virens. Aquaculture 322-323:177-183).  Encouraged by these findings, and with the help of funding from the MAIC,  we seeded the bottom underneath a salmon net pen in Eastport Maine with 40,000 sandworms reared from our hatchery.  The study was encouraging in that we were able to colonize the sediments under the pens with worms, but inconclusive insofar as determining if any of the anticipated benefits on sediment chemistry occurred.  To read the project report see: Preliminary Investigation of the Potential for Integrated Aquaculture of the Sand Worm (Nereis virens) with Atlantic Salmon

IMTA can also occur in intensive land-based tank culture. Our most recent IMTA project took place at the CCAR between 2016-2017, headed by Chief Scientist Tap Pryor of Acadia Harvest, Inc.  The project, funded with a Small Business Innovation Research (SBIR) grant through the National Science Foundation (NSF), examined various aspects of IMTA in a land-based RAS combining California yellowtail with other organisms.