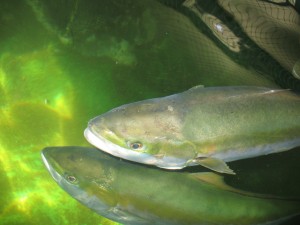 The nine recognized species in the genus Seriola, commonly known as amberjack, are fast swimming carnivorous fish, mostly found in tropical and subtropical waters of the Atlantic, Indian and Pacific oceans. Although in some respects they resemble  Scombridae fish such as tuna or mackerel, amberjacks are in the Carangidae family.   Some specimens can weigh up to 41 kg (90 lbs), and the firm texture and rich flavor of their flesh have made them highly sought after for human consumption.  They are well regarded as a sushi fish, and are variously known on Japanese menus as hamachi, buri, kampachi, and hiramasa depending on species and size.  Of the nine species in the genus Seriola, four make up the majority that are consumed. These are the Japanese amberjack, Seriola quinqueradiata;  the greater amberjack, Seriola dummerili; the Almaco jack, Seriola rivoliana; and the yellowtail amberjack or kingfish, Seriola lalandi.

Although capture fisheries have long existed for these four species, over 150,000 tonnes are farmed each year through aquaculture.  S. quinqueradiata accounts for 80% of aquaculture production, and the vast majority of this is done in ocean pens in Japan and Korea.  The other three species are also farmed this way, but there is increasing interest in land-based tank farming of Seriola, and trials are underway in several countries including Germany, Australia, Chile, and the United States.  Seriola spp. display several traits that make them especially favorable candidates for intensive RAS.  These include strong schooling behavior, tolerance of high densities, fast growth, a well established and lucrative market, and recent progress with producing hatchery juveniles. 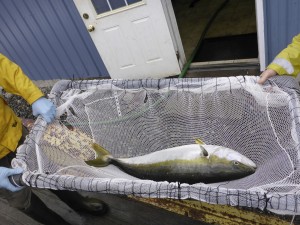 Our aquaculture program for yellowtail began in 2011, when former industry partner Acadia Harvest, Inc. got their first batch of juvenile yellowtail from the former Great Bay Aquaculture hatchery in Portsmouth NH, and began growing them in one of the rearing units at the Center.  It quickly became apparent that we were working with a remarkable fish.  The vigorous, fast growing juveniles proved to be well adapted to tank culture, and less than 14 months later many were well over 1 kg in weight. The following year we rescued the entire collection of yellowtail  broodstock fish held at Great Bay Aquaculture when the company closed operations.  The fish, weighing between 5 to 7 kg, were transported to Maine in  containers full of oxygenated seawater. They had been reared at the Great Bay hatchery from eggs sourced from California and Chilean stocks.  Having two separate geographical stocks of these fish could someday provide the basis for a selective breeding program. Altogether, 142 broodstock were brought back to the Center, allowing us to develop a hatchery program for this species.  The broodstock are held in a recirculation system with controlled light and temperature regimes. As of 2018 we have successfully produced four batches of yellowtail juveniles.