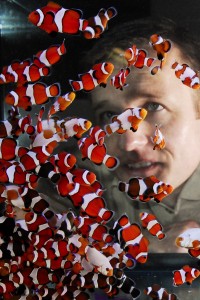 Sea and Reef Aquaculture LLC is a start up company and the CCAR aquaculture business incubator’s latest tenant. The company was formed by two University of Maine graduate students, Søren Hansen and Chad Callan. Søren is a Ph.D. candidate in Marine Biology at the School of Marine Sciences. Sea and Reef grow marine ornamental fish and other aquatics for the aquarium hobbyist market, specializing in culturing high-value marine ornamental fish. In recent years keeping of marine aquariums have become increasingly popular due to improved technology and husbandry methods. It is estimated that the annual value of the aquarium industry is $7.2 billion worldwide, with 60% of the market being within the United States. The predominant source of fish (>95%) are wild collected and each year 18 million fish are imported to the US with a wholesale value of about $250 million. The collection of reef organisms threatens the coral reefs due to frequent overharvesting and the use of damaging collection techniques, including the use of sodium cyanide and dynamite. Marine ornamental fish aquaculture is still in its infancy and to date only 21 species are cultured commercially in contrast to 1,471 species collected from coral reefs. Sea & Reef was established in 2003 and was the first marine ornamental fish farm in New England. The business is currently relocating from the University of Maine’s Aquaculture Research Center (ARC) to the CCAR. For the past 6 years, their R&D efforts have been focused on optimizing broodstock nutrition, larval rearing protocols, coloration and shipping methods. They are now raising 11 different species of marine ornamental fish, all of which are sold to retail pet stores in Maine and across the country. They have proven that the entire production cycle can be accomplished in an inland bio-secure facility using re-circulating technology. Their products have been well received in the market place and retail pet store customers have provided positive feedback on the quality of Sea and Reef’s fish which are in high demand from environmentally conscientious hobbyists.