In 2001 the CCAR partnered with Seabait Maine LLC to develop indoor worm farming technology in Maine using recirculation systems. Seabait (Maine) LLC was formed by parent company Seabait Ltd in the UK, a world pioneer of farmed marine polychaete worms (rag worms or sand worms). The market for sand worms as fishing bait in the USA is well established but often under-supplied due to declining wild catches. There is also a worldwide market for frozen sand worms as a high value, pathogen-free shrimp broodstock feed.

The company’s activities in Maine were funded first by two MTI Seed Grants and then an MTI Development Award.  Peter Cowin, a company founder, worked with the CCAR to develop the worlds first indoor recirculating marine polychaete worm farm. The CCAR provided Seabait Maine LLC with the technology for marine recirculation systems, and in 2003 we constructed a demonstration growout system capable of growing up to 2.5 million worms to harvest size per year (approximately 7 metric tons). The production methods proved extremely successful and the business was shown to be commercially viable at only a slightly larger scale than this demonstration system.

In 2008 Seabait Ltd in the UK went into receivership and Seabait Maine LLC was dissolved. The CCAR continues to carry out research into marine polychaete worm aquaculture and it is hoped that this species will be one of the next candidates for Maine aquaculture.

We have also investigated the use of farmed marine worms as a component of broodstock halibut feeds in a project funded by the Northeast Regional Aquaculture Center (NRAC).  Other sand worm research at the CCAR has explored growing polychaete worms as a bioremediation organism in polyculture systems.  Sand worms are deposit feeders and will feed on particulate wastes from fish production systems. In a project funded by the MAIC we placed over 100,000 juvenile worms in experimental plots under salmon pens. These worms seemed to thrive in this environment and this method has the potential to improve both the environmental and economic performance of salmon farming in Maine.

In research published in the journal Aquaculture, we used waste from a marine recirculation system holding Atlantic halibut as a feed source for sand worms. The worms grew just as well on the wastes as they did on feeds formulated for worms. In addition, the worm beds can act as efficient biofilters providing nitrification and dentrification services for the recirculation system. The benefits of this approach are tremendous. Waste treatment systems can be simplified, waste discharge is almost zero, and a secondary, high value product is produced (see below). Valuable protein and lipids are captured and environmental impacts are minimized.

We are now working on engineering systems that integrate fish and worm culture into the same facility, with the hope this will become a widespread practice in the future, helping  improve the sustainability of marine aquaculture. 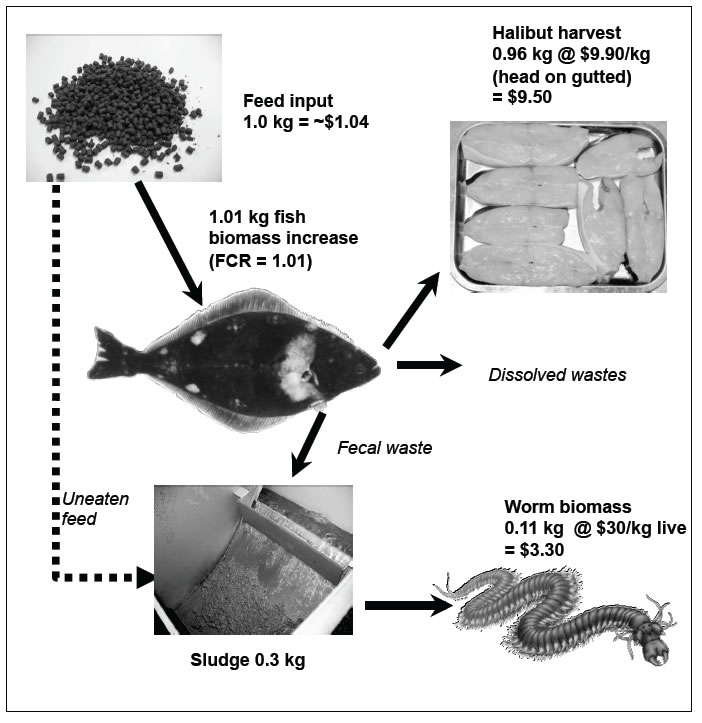