Terrell House was built from 1986-1988. It was designed to fulfill the dream of Professor Carroll F. Terrell — Ezra Pound scholar and founder of the National Poetry Foundation — who wished to combine structural longevity with energy efficiency. The result became Terrell’s residence/library until his passing in 2003. Designed and built by R.W. Estela — a local contractor, UMaine alumnus, and former Terrell student — Terrell House is an intriguing blend of art and science, aesthetics and function.

Following Terrell’s death, the house was a residence for English Department faculty for several years. But by January, 2012, the house was empty and unused. Janet Waldron, former Senior Vice President for Administration and Finance, suggested that UMaine establish its first on-campus permaculture demonstration site at Terrell House.

With support from interested faculty, staff, and students, a small group drafted a proposal to create a permaculture living & learning center at Terrell House. The proposal was approved in April 2012, and the first residents moved in mid-August 2012. 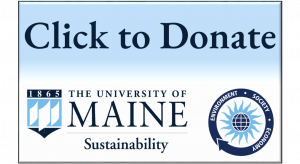