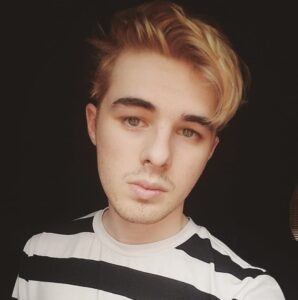 Colin Ingalls discovered New Media at the University of Maine after leaving high school uncertain about what he was going to do with his future. As both a tinkerer and a maker, Colin was always seeking a new skill to develop or a new project to tackle. The New Media program presented an opportunity for Colin to explore a huge variety of different approaches to media communication. Colin is a firm believer that “it’s better to be a jack of all trades rather than a master of one”. New Media allowed him to gain experience in a large variety of topics, ranging from graphic design to working with microcontrollers. Colin believes such a breadth of experiences allows him to be extremely versatile in the field of multimedia design. Colin’s portfolio of work includes examples of graphic design, audio-visual production, and 3D game asset creation.

However, perhaps the most compelling piece of Colin’s work is a project he’s named lighthouse. Growing up in rural Maine, Colin realized the potential for new media to connect people separated by great distances. With the current situation surrounding COVID 19, the potential of these connections is more valuable than ever. Lighthouse is a network of WIFI enabled lanterns that react when one unit is activated. Colin explained “ these lanterns can be anywhere in the world, and the idea is to let someone know you’re thinking about them, even when you don’t have to words to say it”. Imagine a family scattered across the country, across the world. Lighthouse presents an opportunity to communicate connection across uncrossable distances. “to me, a lighthouse signals you’re close to home” Colin continued, “this project aims to convey that feeling of connecting with home, wherever in the world you may find yourself”. Colin intends to continue his development of Lighthouse, as right now it remains a prototype. While Lighthouse was not the product of any particular courses in the New Media program, Colin maintains that without his experiences in New Media, none of this would have been possible.