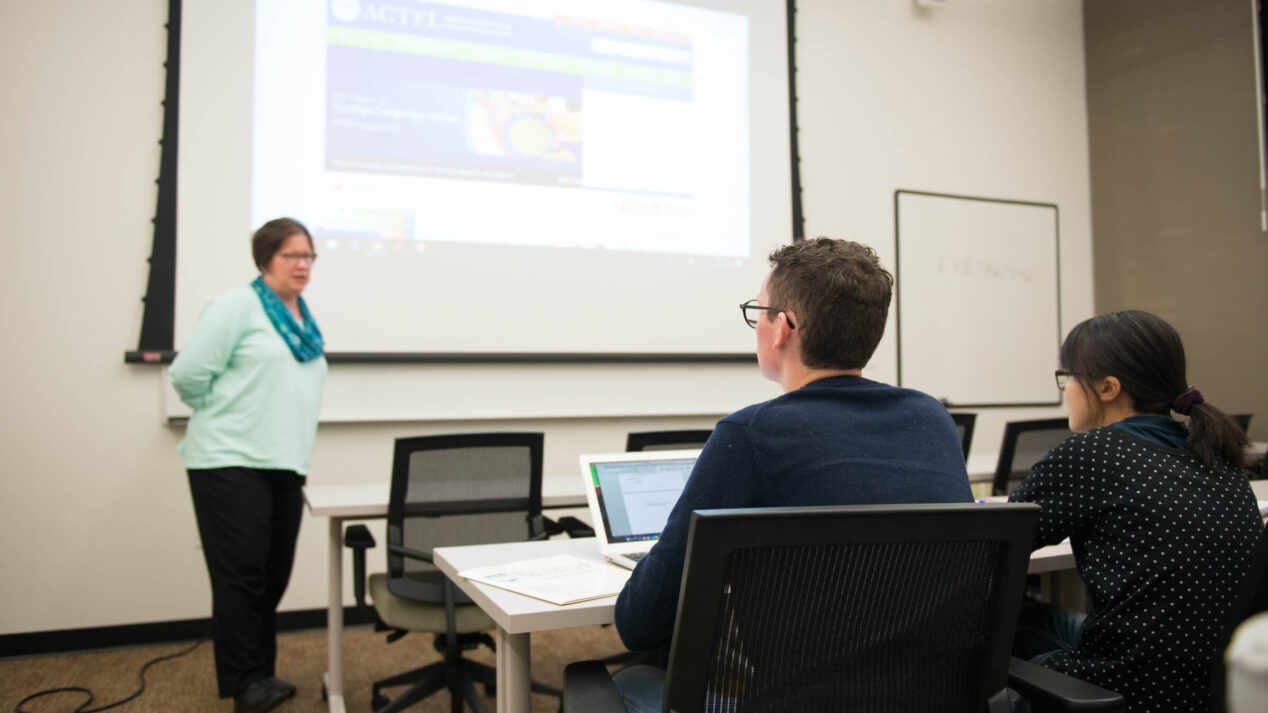 The M.A.T. in French (30 credits) and the M.A.T. in Spanish (30 credits) have been redesigned with the collaboration of the campuses of the University of Maine System specifically to meet the needs of Maine’s schools. The programs offer full-time instruction during the academic year to meet the requirements of pre-service teachers and an intensive institute during the summer for in-service teachers. Candidates take seven to eight courses (21-24 credits) in language, literature, culture and linguistics in the target language, one course in language pedagogy (MLC 466/566) and one course on teaching the exceptional student in English (SED 402/500). An oral exam and a professional teaching portfolio which illustrate the candidate’s familiarity with Maine’s teaching standards and his/her readiness to teach a second language in the K-12 classroom are the final requirements for both degrees.

Practicing teachers who are already certified to teach French or Spanish may opt to take additional courses in their target language, or they may resume the study of a second foreign language at the advanced (400 or 500) level in lieu of taking courses leading to certification.

The Maine State Summer Institute for Teachers of French and Spanish is planned and overseen by an Advisory Council that makes recommendations to the Graduate Coordinator of the Department of Modern Languages and Classics at the University of Maine, Prof. Carlos Villacorta.

The Master of Arts in French

This program (30 credits) is intended for individuals with an interest in language, linguistics, literature, or culture and who are considering pursuing a doctoral degree in the field. The candidate will be expected to demonstrate both oral and written proficiency in French in the course of his or her studies. Candidates must complete 24 credits of course work in literature, language, linguistics and culture, with a minimum of 12 credits at the 500-level. The program of study may include courses in other departments when these relate to the student’s field of interest. Six hours of thesis credits are also required. Upon completion of the thesis, the Master of Arts candidate will defend the thesis for a committee of the graduate faculty at an oral examination which will also include questions on the student’s course work.

This concentration is intended for individuals with an interest in literature. Candidates specializing in French literature are expected to complete the requirements for the M.A. described above by including four courses in literature, three of which must be at the 500-level, in their program of study.

North American French studies at the University of Maine developed from a natural link between the department and the geographic location of the university. The large number of francophone citizens who make up the population of the state of Maine, the significant communities with French heritage (Quebécois and Acadian) that surround it, and the presence of Franco-American and Canadian-American Centers on campus have combined to create a strong interest and an expertise in North American French language and culture. The requirements for this degree are similar to those of the M.A. described above. The primary difference is that literature, language, and culture courses will be oriented to francophone North America.

The Department of Modern Languages and Classics annually awards one graduate teaching assistantship in French. The TA generally teaches one first or second-year French course per semester. Graduate degree candidates may also be nominated for Trustee Tuition Scholarships and Chase Distinguished Research Assistantships offered by the Graduate School. Others may qualify for Canadian-American Center Assistantships, New England, Atlantic Provinces, and Québec Fellowships, and Foreign Language and Area Studies awards available through the Canadian-American Center.

Would you like to apply?  Please see the Graduate School’s online application.