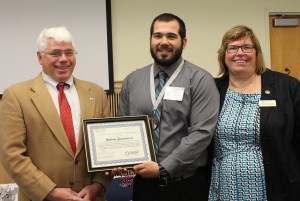 All non-traditional undergraduate students who will graduate in May, August or December of that year are invited to attend a special graduation breakfast during the last week of classes of Spring semester. Each non-traditional graduate is recognized and receives a special “non-trad grad” medallion. Graduates are encouraged to wear these medallions at their UM commencement

Non-traditional Undergraduate students who are graduating this coming May, August or December should be receiving invitations by late March/early April. If you have questions or did not receive an invitation and would like one, contact CNTSP at UM.CNTSP@maine.edu.

Special recognition for non-traditional students and supportive faculty and staff is awarded at the annual Non-traditional Graduation Breakfast. Nominations for these awards may be submitted through the links listed below.

The next nomination process opens July 2022.

This award, named after the first recipient, Linda Bradford, honors a non-traditional student who has contributed much to the community. This award recognizes an individual who, despite assuming multiple roles (as a student plus employee, partner/spouse, parent, etc.) still volunteers to serve others and contributes their talents, skills and time to the benefit of others. This award is sponsored by the Non-traditional Student Association (NSA).

This non-traditional student has shown a passion for life-long learning and serving their community.  Through relationships, role modeling and volunteer service this student has contributed in extraordinary ways to the University of Maine and the community.

Faculty and Staff Who Support and Assist Non-traditional Students