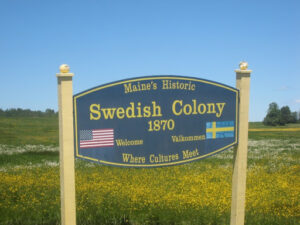 According to Aroostook ME, “The town of Stockholm began in 1881. It was first named Upsala after a suburb of Stockholm in old Sweden. Later, probably with aspirations to greatness, the name was changed to Stockholm, after the capital of Sweden. Early in the town’s history, forests, agriculture and the railroad were important. The Madawaska River was dammed and many mills were located nearby.”

According to Wikipedia, “In the late 19th and early 20th centuries, French and Swedish were the primary languages of many families living and working in Stockholm. Many French-speaking Acadians migrated to Stockholm to work in the three wood mills Stockholm had at the time..” The town currently has 250 residents per the 2020 census.