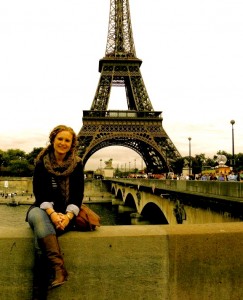 I am studying languages because of their role in human connection. Learning French has allowed me to not only connect with different cultures, but it has also given me the chance to build relationships with native French speakers. Studying a language has allowed me to create worldwide connections. and has opened doors to many experiences which would have otherwise been unattainable, such as the ability to visit another country and communicate in their language. As a future teacher, I hope to share with my students the desire to connect with different cultures and different people from all over the world.