The Mudflat: Creating space and making connections to support shellfishing

Shellfishing is an essential part of the fabric of Maine and Wabanaki coastal communities. How does a new collaborative website help to sustain it?

Mudflat. You go to the mudflat if you want to get clams.

(From the Passamaquoddy-Maliseet Dictionary and Portal)

When you visit The Mudflat, a website launched in 2021 by the Maine Shellfish Learning Network (MSLN), you are greeted with these words in the Passamaquoddy and Maliseet languages, and in English. You are then invited to explore the site as a “web-based mudflat,” a place to gather information about clams and other shellfish, learn about research happening in coastal communities, and dig into the history and stories connected with shellfishing in Maine communities and Wabanaki Tribal Nations. 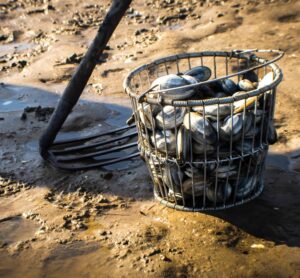 Shellfishing is deeply embedded in the foodways, cultures and traditions of communities all along the coast. This livelihood also contributes significant value to the marine economies and sustenance fishing cultures of coastal areas.

The term “shellfish” can include soft-shell and hardshell (or quahog) clams, mussels, oysters, scallops and other species. When we talk about mudflats, we’re mostly talking about soft- and hardshell clams and mussels. (See “The Power of Language” below)

Although shellfishing is crucial for many coastal communities, it faces some daunting challenges. These include water quality problems caused by bacterial pollution, increasing pressure from predators like green crabs, shoreline access, climate change effects, market and price fluctuations, and limited civic capacity for conservation at the municipal level. And shellfishing hasn’t been recognized and supported as much as other fisheries, such as Maine lobster, says Bridie McGreavy, an associate professor of environmental communication and faculty fellow with the Senator George J. Mitchell Center for Sustainability Solutions at The University of Maine. She calls it “a fishery worth investing in.”

The MSLN is a statewide network of shellfish harvesters, managers, scientists, regulators and educators formed in 2019 that has grown through more than a decade of capacity-building and partnership development. This unique effort connects more than 25 communities across the coast from Yarmouth to Lubec and is supported in part by a fund at the Maine Community Foundation. 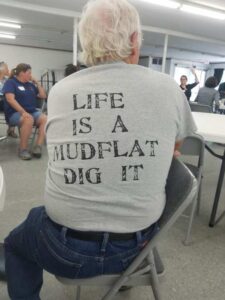 The need for a network was identified through listening sessions held at Shellfish Focus Day during the Maine Fishermen’s Forum and many more meetings, conversations, interviews and previously published studies. Earlier Mitchell Center projects, including the Sustainability Solutions Initiative, Safe Beaches and Shellfish, and Strengthening Coastal Economies, also helped lay the groundwork for the MSLN.

The core MSLN team, based at UMaine, is co-led by Bridie McGreavy with Anthony Sutton, Gabrielle Hillyer, B. Lauer and Katie Moody. Sutton is the MSLN’s community food facilitator and completed a Ph.D. at UMaine in Wabanaki food systems. Hillyer is project coordinator for the MSLN as well as a Ph.D. student and member of the National Research Traineeship (NRT) Program in Conservation Science and Practice at UMaine whose research focuses on shellfishing and coastal communities. Lauer is a UMaine master’s student in the NRT program who joined the project in fall 2021 and serves as fisheries policy coordinator. Moody is digital media coordinator and has been helping to enrich and expand content on The Mudflat.

Two of the earliest priorities identified for the network were finding ways to tackle water quality problems so that mudflats could be safely reopened for harvesting, and creating more opportunities for people involved in shellfishing to connect, share resources and learn from each other.

In Maine, shellfishing is regulated through a co-management system where local municipalities and the state share responsibilities for stewardship; river herring is the only other fishery in the state that uses this system. The Maine Department of Marine Resources (DMR) works with more than 70 municipalities that have enacted shellfishing ordinances. This gives municipalities the ability to shape regulations—within state guidelines—to meet their local needs.

“So much of the work that’s happening in shellfishing happens at the municipal level, and municipalities have many varying needs they’re trying to serve,” says Jessica Joyce, a public member of the DMR Shellfish Advisory Council and co-facilitator of the Casco Bay Regional Shellfish Working Group. “Towns are always saying, ‘We need to do this, how do we do it?’” she notes. “Now I can say ‘Here, go to The Mudflat,’ and they can find resources they need.”

The Mudflat also helps to raise awareness of shellfishing and the ways it is intertwined with communities, notes Joyce. “It lets the public see that there’s a lot going on in our communities trying to preserve our shellfish fishery, and the jobs and livelihoods that rely on it.”

“Towns are always saying, ‘We need to do this, how do we do it?’ Now I can say ‘Here, go to The Mudflat,’ and they can find resources they need.”

All in the same boat

The Mudflat brings together information on a range of shellfish research projects focused on identifying sources of water pollution affecting mudflats, protecting shoreline access to harvesting areas and assessing the resilience of coastal ecosystems. Several projects aim to restore shellfish populations that have declined due to increasing numbers of predators such as green crabs and milky ribbon worms. Some communities are trying to bolster the growth of quahogs (hardshell clams) to offset the decline of soft-shell clams. Quahogs have thicker, harder shells that may make them less vulnerable to predators and to increasing ocean acidity, and there is growing interest in them from harvesters and seafood buyers. 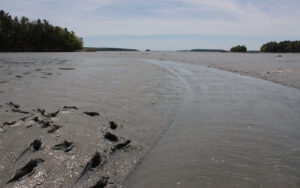 UMaine master’s student B. Lauer calls The Mudflat “a digital gathering place” where people can learn about research projects  being done in coastal communities and also connect with project coordinators. Lauer, who’d never been on a mudflat before joining the MSLN, brings a background in freshwater ecosystems and experience in local water policy, as well as a passion for “what moves people from knowledge to action, and how to build community resilience.”

Katie Moody’s background includes journalism, climate resilience and environmental policy. “Writing about research projects for The Mudflat,” she says, “has shown me the careful stewardship and resourcefulness that towns and harvesters have for conserving the intertidal, and shellfish populations.”

David Taylor, a shellfish harvester and lobsterman in midcoast Maine who chairs the Georges River Shellfish Management Committee, has applied for and received funding for several research projects, with support from MSLN partners, through the Maine Shellfish Restoration and Resilience Fund (MSRRF). The MSRRF is a partnership between the DMR’s Shellfish Advisory Council, the Department of Communication and Journalism at UMaine and the Mitchell Center and receives support from a fund at the Maine Community Foundation.

Taylor is working hard to keep shellfishing going. His father dug clams, and so does his brother. “We grew up on the mudflats,” he says.

“I really like to have information on what other towns are doing, particularly with the impacts from wildlife on water quality, and enhancing shellfish populations,” he adds. “We’re all in the same boat.”

Space for multiple ways of knowing

The Mudflat also acknowledges that Wabanaki peoples, including the Penobscot, Passamaquoddy, Maliseet and Mi’qmaq, have “long-term cultural and scientific knowledge about mudflats,” and that shellfishing is an essential part of Wabanaki identity and ways of living. The site includes Wabanaki language to recognize Indgenious knowledge about intertidal ecosystems, as well as to honor the oldest clamming cultures within this land, which have their own perspectives, challenges and visions for clam management.

Recognizing diverse ways of knowing—and fostering connections among them—is a core value of the MSLN, and of The Mudflat. “It’s not just a western science thing,” says Sutton. “There were Wabanaki people managing clams through their knowledge systems for centuries prior to European arrival. So we’re trying to create space not only for multiple users but also multiple ways of knowing.”

What does it mean for a website to be collaborative? By design, The Mudflat is not just a site that’s produced and shared with visitors or users, says McGreavy, but a gathering place that continues to evolve in response to the needs and input of MSLN partners. Sutton calls it “a living, growing thing.”

Hillyer notes that MSLN partners are engaged in ongoing conversations—on the phone, on the docks, in meetings—about what’s happening and what’s needed in shellfishing. The Mudflat helps to bring the knowledge gleaned in these informal ways to a broader audience across the MSLN, as the core team adapts the website’s content to reflect participants’ knowledge and needs.

That doesn’t mean that The Mudflat reaches everyone, Hillyer and other MSLN partners are quick to point out. Not everyone engaged in shellfishing has reliable access to the internet, for example. The Mudflat, and other forms of digital communication such as email, represent one way for MSLN partners to connect and share resources, Hillyer says, a way that’s more visible but not more important than others. The team also develops content, like downloadable and printable PDFs of project profiles, that can be shared offline as well.

“It’s not just a western science thing. There were Wabanaki people managing clams through their knowledge systems for centuries prior to European arrival. So we’re trying to create space not only for multiple users but also multiple ways of knowing.” 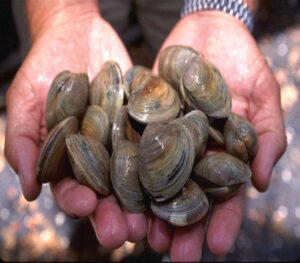 In the future, Sutton sees the MSLN focusing more on shellfish as food, and shellfishing as a way to support strong local food systems—an important part of the past, present and future of coastal Maine and Wabanaki communities. This focus, he says, is an idea that’s been shared by many MSLN partners.

The physical space of a mudflat, where sea meets shore as tides wash in and out each day, “organizes everyone and doesn’t discriminate,” says Sutton, whether researcher, Mainer, Wabanaki person or clammer. “And that’s the metaphor we’re drawing on with The Mudflat, that this should be for anyone whose life and work happen in this place, this very unique place.”

The Power of Language

From top to bottom: 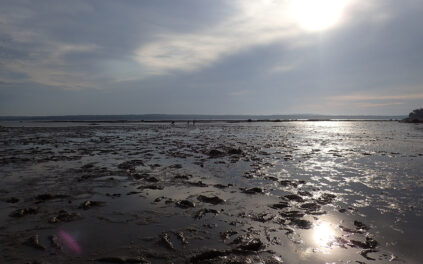 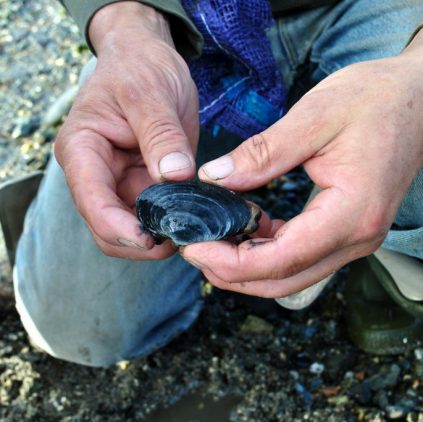 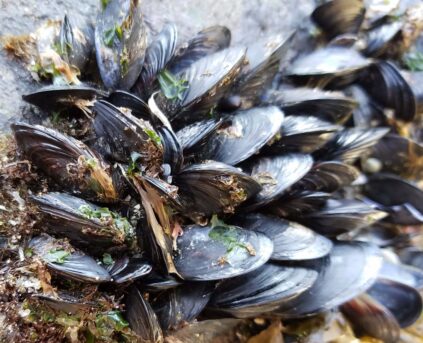