Understanding how best to make a topic, subject or theme relevant to non-specialized audiences is a skill that takes years to master. This roundtable event brings three nationally recognized University of Maine scholars together to discuss the process of planning, researching, and composing their new books, and how they were able to gain the interest of the publishers who eventually supported and published their projects. The event will take place on December 2, 2021, at 3 p.m. ET in Arthur St. John Hill Auditorium in Barrows Hall, and virtually via Zoom.

Professor of Political Science Amy Fried’s new (co-authored) book, titled At War with Government: How Conservatives Weaponized Distrust from Goldwater to Trump, was published by Columbia University Press, Professor of English Margo Lukens’s new (co-authored) book, titled “Still They Remember Me” Penobscot Transformer Tales, Volume 1, was published by University of Massachusetts Press, and Professor Emeritus of Sociology Kyriacos Markides’s new book, titled The Accidental Immigrant: A Quest for Spirit in a Skeptical Age, was published by Hamilton Books. All three books appeared this year (2021), and all three authors employed tools drawn from the humanities – historical inquiry, thoughtful reflection, and understandings of perspective and connection – to develop their ideas and complete their projects.

The event is part of the McGillicuddy Humanities Center’s 2021-2022 Annual Symposium: “Humanities: Impact in Real Life.”

Amy Fried is John Mitchell Nickerson Professor of Political Science at the University of Maine. She is the author of Muffled Echoes: Oliver North and the Politics of Public Opinion (Columbia, 1997) and Pathways to Polling: Crisis, Cooperation, and the Making of Public Opinion Professions (2012).

Margo Lukens is a scholar of Native American literature who has long collaborated with the Penobscot nation.  She is a Professor of English at the University of Maine, and the former Director of the McGillicuddy Humanities Center.

Kyriacos Markides, Professor Emeritus of Sociology at the University of Maine, has written several books on Christian mysticism for academic publishers including Yale University Press, and trade publishers like Doubleday. 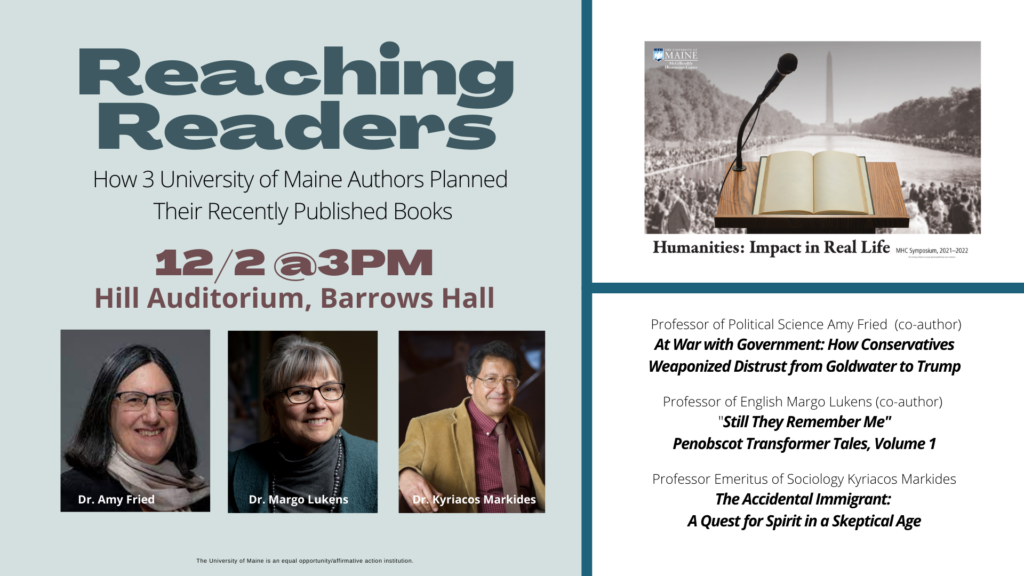