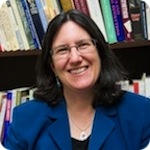 Amy Fried is the John Mitchell Nickerson Professor of Political Science at the University of Maine. She formerly served as Associate Dean for Research in the College of Liberal Arts and Sciences. Fried was the Policy Advocate in the Rising Tide Center, which was funded by a five-year National Science Foundation ADVANCE-Institutional Transformation grant she co-wrote and for which she served as Co-Principal Investigator

Fried’s most recent scholarly book, At War With Government: How Conservatives Weaponized Distrust from Goldwater to Trump, is co-authored with Douglas B. Harris and was published by Columbia University Press in 2021. Fried is also the author of Pathways to Polling: Crisis, Cooperation, and the Making of Public Opinion Professions (Routledge Press, 2012), Muffled Echoes: Oliver North and the Politics of Public Opinion (Columbia University Press, 1997) and many shorter works in scholarly edited volumes and journals

Fried provides analysis to a wide range of media outlets and writes a biweekly column for the Bangor Daily News. In addition, she serves on the Steering Committee of the Scholars Strategy Network, a national group that brings together scholars to address public challenges and their policy implications.

Prof. Fried won the 2019 Rising Tide Career Recognition Award and the 2016 Presidential Public Service Award from the University of Maine and in 2015 was named the Outstanding faculty member in Service and Outreach by the College of Liberal Arts and Sciences. For her work on Alexis de Tocqueville and social capital, Professor Fried received the John C. Donovan award from the New England Political Science Association.