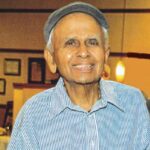 V. K Balakrishnan, Emeritus Professor of Mathematics at the University of Maine, died on September 23, 2019 at home in Austin TX.

Professor Balakrishnan earned his Ph.D. at SUNY Stonybrook in 1970, after which he taught mathematics at UMaine for more than 34 years until his retirement in 2004. He also served for a time as Assistant Dean in the College of Liberal Arts and Sciences. In the 1990’s, he authored five books on various topics in mathematics such as Combinatorics, Graph Theory, Network Optimization, and Discrete Mathematics. In 2012, he authored “The Complete Mahabharata in a Nutshell”.

The funeral service will take place on Thursday September 26th at 11 am, at Weed-Corley-Fish Funeral Home, 411 Ranch Rd. 620 s in Lakeway TX.  His wife Geeta Balakrishnan can be reached by mail addressed to Apt. 301, 22601 Bee Cave Parkway, Austin TX.