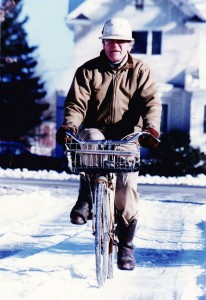 Professor Henry Andrew Pogorzelski passed away on December 30, 2015 at the age of 93. Dr. Pogorzelski was a member of the Department of Mathematics & Statistics at the University of Maine from 1969 to 2011. His research focused on developing semiological mathematics and applying it to Goldbach’s conjecture.  He often spoke of his experiences working as assistant to Andre Weil at the Institute for Advanced Study at Princeton in the mid 1960’s. He obtained his PhD in 1969 under the direction of Raymond Smullyan at CUNY. After coming to Maine, he founded and directed the Research Institute for Mathematics in Orono and continued to be a passionate advocate for research in pure mathematics. Our sincere condolences go out to Dr. Pogorzelski’s family.