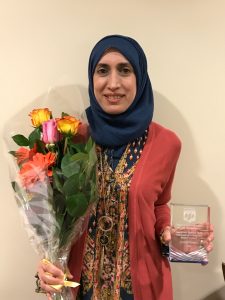 Dina Yacoubagha, MSW Graduate Class of 2018 was awarded the Jean A. and David A. Webb Outstanding Professional Master’s Degree Student Award for our College.  Not only has Dina been a leader among her classmates in the academic setting, she has also been a leader in her remarkable community service to the University.  Some examples include her efforts to break the stereotype of Muslim women as oppressed and uneducated through presentations in multiple venues.  She has helped to organize the Maine Day Meal Pack-out by soliciting volunteers from the School of Social Work Student Organization and the Muslim Student Association.  For three years she has worked with the Muslim Student Association to organize activities for Islamic Awareness Week.  Dina also serves on the Board of the Wilson Center through which she has worked with University and community faith groups to promote social justice and spiritual diversity.  She has twice presented to audiences of students, faculty and members of faith groups at the Wilson Center on the topics of Muslim women, spirituality, and the role of social activism in Islam. In addition to Dina’s service to the wider University community, she has been active in her service to the School of Social Work over the past four years.  Dina’s service to the community outside the University is also quite extraordinary and reflects her commitment to social and economic justice.  She is an active volunteer with the community group Food AND Medicine through which she has been a leader on a number of initiatives including a fair intended to help low-income women learn about services available to them and organizing a letter-writing campaign against the 2017 immigration ban at the Islamic Center of Maine. The School is proud to have such an important spokesperson and committed activist as a student in our Graduate Program.  Her commitment to expanding social and economic justice, and to opening dialogue among diverse groups, represent the core values of the social work profession.