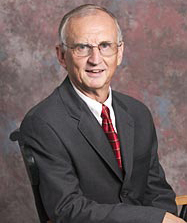 Robert Kennedy arrived at the University of Maine in 2000, first serving as vice president for academic affairs and provost, followed by an eight-month term as interim president. His presidency was marked by the development of the “New Model Land-Grant University,” a collaboration with other educational and research institutions to share resources and attract research funding. The University of Maine Graduate School of Biomedical Sciences was formed under this initiative, in partnership with The Jackson Laboratory in Bar Harbor, Eastern Maine Healthcare Systems in Brewer and other Maine-based research institutions. Kennedy also launched “Campaign Maine,” a six-year, $150 million private fundraising initiative. It is the largest private fundraiser in the University’s history. His administration also saw the construction of the LEED-certified New Balance Student Recreation and Fitness Center. Kennedy earned his undergraduate degree from the University of Minnesota and a Ph.D. in botany from the University of California at Berkeley. Following his UMaine presidency, Kennedy was appointed interim president of Connecticut’s new Board of Regents of Higher Education.