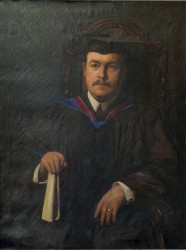 It was in 1897, during the presidency of Abram Harris, that the former Maine State College of Agriculture and the Mechanical Arts was renamed the University of Maine. For the first time, the Maine Legislature assigned a fixed annual appropriation to the school and affirmed the right of the Board of Trustees to expand course offerings to include classics and professional programs. Enrollment increased from about 140 students to more than 400 and faculty grew from 24 to 54, reflecting new offerings in electrical engineering, pharmacy, law and pre-medicine. Harris oversaw the construction of Alumni Hall, as well as the remodeling of a former farm building into Mt. Vernon, the first women’s dorm on campus, which later burned. In addition, Harris led an initiative to plan new roads and walkways, and to plant nearly 2,500 trees and shrubs on the expanding campus. Harris died in 1935 at the age of 76.