In this talk, Michael Swacha explores the epistemological affinities between Virginia Woolf’s 1931 novel The Waves and the new discoveries in physics during the early twentieth century, all in order to posit the potential that modernist notions of fragmentation and perception hold for opening and imagining new ways of knowing, existing, and relating to one another. 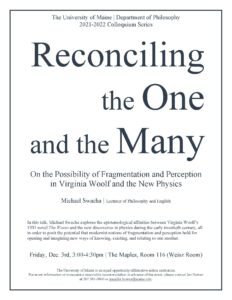 Recent work in philosophy of logic has focused on whether it is possible to revise logic and how one could justify such revisions. In order to justify a revision of logic, it seems like you should consider arguments for revision, but you must presuppose some logic to evaluate any such arguments! In this talk, I will first introduce a framework for theory choice in logic that suggests such justifications are abductive. Recent defenders of such a framework have argued that logic is “unexceptional” and theory choice in logic is analogous to scientific theory choice. I argue that this is not quite right: the correct process may be abductive, but logic nevertheless has unique theoretical virtues that motivate theory choice. To do so, I turn to some cases of disagreement about logic from debates within the foundational crisis in mathematics. These reveal competing views about the role and virtues of logic that can help us formulate a better abductive framework. 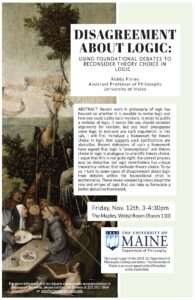 A Panel discussion with Frank B. Wilderson III and Ranjana Khanna
On Questions of Structural Change: The Human, Afropessimism, and Indignity

WHEN: April 20th, 3pm-5pm EDT
WHAT: A Panel discussion with Frank B. Wilderson III and Ranjana Khanna
On Questions of Structural Change: The Human, Afropessimism, and Indignity
WHERE: Zoom Registration required: https://coa.zoom.us/meeting/register/tZYvdOyqpjorEtDP6wjsGAoFVEb113DAThqp

This event is co-sponsored by the Colby Center for the Arts and Humanities, the University of Maine, Philosophy Department, and College of the Atlantic.

This panel brings two contemporary thinkers in the Humanities, Frank B. Wilderson III and Ranjana Khanna, into conversation about questions of racism, colonialism, and sexual difference. Wilderson and Khanna both engage critically with notions of the human. Wilderson has argued that Humanist thought and its material implications are dependent on Black death; he suggests that within this configuration, “Human Life is dependent on Black death for its existence and for its conceptual coherence.” Wilderson offers Afropessimism as an analytic lens, arguing that it shows an irreconcilable difference between the violence of capitalism, gender oppression, White supremacy and colonialism on the one hand, and the violence of anti-Blackness on the other. Khanna has argued for a radical reassessment of the use of dignity as the basis for understandings of the human. She proposes instead a consideration of the human in terms of disposability. Through psychoanalytic, feminist, Marxist and literary analyses, Khanna offers an approach to questions of political change and justice through a focus on moments of dissolution that challenge rather than reinforce the rights-bearing liberal subject and humanist assumptions of “sameness and consistency as being the mark of signature, personhood, humanness, autonomy, or life itself.”

Although Wilderson and Khanna are both informed by an overlapping archive in Marxist and psychoanalytic thought, they offer different provocations, and arrive at different arguments and questions. Both consider subjectivity through analyses of racism, colonialism, capitalism and sexual difference that attend to structural relations and the legacies of humanist notions of the human.  A conversation between them thus promises to be generative for a diverse audience,  and particularly timely for the current political moment. The first part of the panel will consist of Wilderson III and Khanna responding to each other’s work, with a focus on two texts: “The Trouble with Humans” (from Afropessimism) and  “Indignity.” The second part of the panel will be a Q&A discussion, with time for audience members to pose questions to the speakers.

Frank B. Wilderson III
Frank B. Wilderson III is Chancellor’s Professor and Chair of African American Studies, and a core faculty member of the Culture & Theory Ph.D. Program at UC Irvine; and an award-winning writer whose books include Afropessimism (Liveright/W.W. Norton 2020); Incognegro: A Memoir of Exile and Apartheid(Duke University Press 2015); and Red, White, & Black: Cinema and the Structure of U.S. Antagonisms (Duke University Press 2010).  He spent five and a half years in South Africa, where he was one of two Americans to hold elected office in the African National Congress during the apartheid era. He also was a cadre in the underground. His literary awards include The American Book Award; The Zora Neale Hurston/Richard Wright Legacy Award for Creative Nonfiction; The Maya Angelou Award for Best Fiction Portraying the Black Experience in America; and a National Endowment for the Arts Literature Fellowship. As of September 29, 2020, his book Afropessimismhas been Long Listed for the National Book Award (Nonfiction category). Wilderson was educated at Dartmouth College (A.B Government and Philosophy), Columbia University (MFA/Fiction Writing), and UC Berkeley (PhD/Rhetoric).

Ranjana Khanna
Ranjana Khanna is Director of the John Hope Franklin Institute, Professor  of English, Literature, and Gender, Sexuality and Feminist Studies at Duke University, and the incoming second vice-president of the American Comparative Literature Association. Khanna is a literary critic and theorist recognized for her interdisciplinary, feminist, and internationalist contributions to the fields of post-colonial studies, feminist theory, and postcolonial literature and the visual arts. She is best known for her work on melancholia and has also published on film, Algeria, area studies, autobiography, Marxism, and visual and feminist theory. Khanna is the author of Algeria Cuts: Women and Representation, 1830-Present (2007) and Dark Continents: Psychoanalysis and Colonialism (2003). Her articles have been published in a wide range of journals, including Differences, Signs, Third Text, Diacritics, Screen, Art History, positions, SAQ, Feminist Theory, and Public Culture. Her book manuscripts in progress are titled: Asylum and Unbelonging.Khanna served as the Margaret Taylor Smith Director of Gender, Sexuality and Feminist Studies at Duke from 2007–2015. 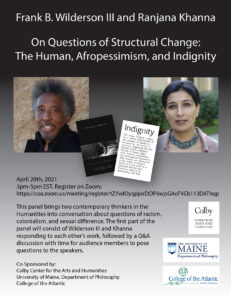 Steve Norton: Soapboxing for the middle of the food chain, a presentation and discussion

When: Thursday, March 25, 4 – 5:30 pm edt
What: There is strong statistical evidence that there is real trouble in the middle of the food chain. Numbers recently published regarding drops in the global populations of insects, amphibians and birds indicate dramatic cause for concern. One would think that human beings would be horrified into action, but when each of these statistics was reported in the news, there was a brief flurry of consternation and then stony silence. The “news” that something is wrong with our environment is hardly news. This paper puzzles over how we might have gotten to this point. It also describes and accompanies author Steve Norton’s sound installation, similarly titled Soapboxing for the middle of the food chain.
Where: Zoom link https://maine.zoom.us/j/89659673310

Steve Norton is a sound artist and musician. His artistic research examines electroacoustic music, improvisation as a method, the environment, modernity and society. Steve’s practice is currently focused on the gathering of field-recorded sound which he utilizes in sound installations and electroacoustic composition. His interest is to increasingly bring the outside world into his work via field recording and topical decisions which engage critical issues.

**Audience members are encouraged to read the below texts (PDFs attached) prior to the event.
https://umaine.edu/philosophy/wp-content/uploads/sites/99/2021/03/Norton-Talk-Reading.pdf 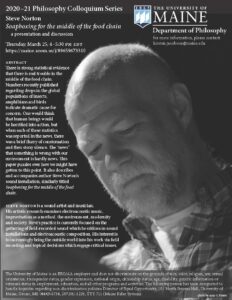 Black Studies and Questions of Institutional and Structural Change: A Discussion with Charisse Burden-Stelly and Jonathan Fenderson

What: An evening of interesting and interdisciplinary conversation, relevant for our times! Dr. Burden-Stelly and Dr. Fenderson will each speak a little bit about their own work in the context of Black Studies and questions of institutional and structural change. They will then open the conversation by each posing a question to the other about their work, and then the discussion will open to questions from and conversation with audience members.

Where: Zoom (registration required: register at the below link)

This event is co-sponsored by the Philosophy Department at the University of Maine and by College of the Atlantic. It will be co-hosted by Kirsten Jacobson and Netta van Vliet, along with students from both institutions.

Charisse Burden-Stelly is an Assistant Professor of Africana Studies and Political Science at Carleton College, and the 2020-2021 Visiting Scholar in the Race and Capitalism Project at the University of Chicago. Burden-Stelly completed her Ph.D. in African Diaspora Studies at the University of California, Berkeley in 2016. Her scholarship traverses African Studies, Critical Theory, Political Theory, and Political Economy with a focus on antiradicalism, anti-blackness, and state-sanctioned violence; globalization and economic development; and epistemologies of Black Studies. She is the co-author, with Dr. Gerald Horne, of W.E.B. Du Bois: A Life in American History, and her published work also appears in a wide range of journals, including Small Axe, Souls, Du Bois Review, Socialism and Democracy, International Journal of Africana Studies, and the CLR James Journal.

Jonathan Fenderson is an Associate Professor in African and African American Studies at Washington University in St. Louis. He earned his PhD in the W.E.B. Du Bois Department of Afro-American Studies at the University of Massachusetts. His research and teaching interests emanate from three themes: intellectual history, social movements, and transnational links between Africa and the Diaspora. He is the author of Building the Black Arts Movement: Hoyt Fuller and the Cultural Politics of the 1960s (2019), as well as of essays in numerous journals and edited volumes.

**Audience members are encouraged to read the below texts (PDFs attached) prior to the event. 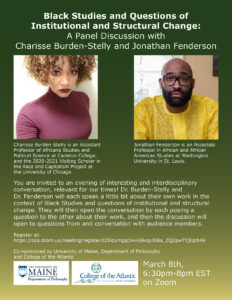 Raising our Voices on Race and Racism

Virtual via Zoom, Free and Open to the Public 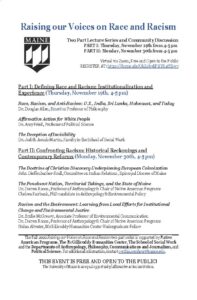 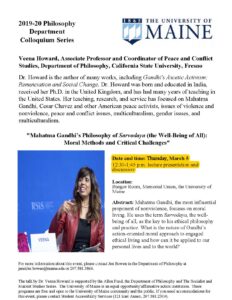 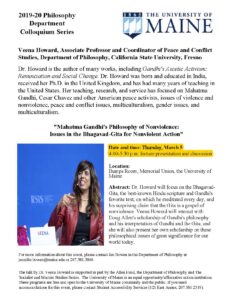 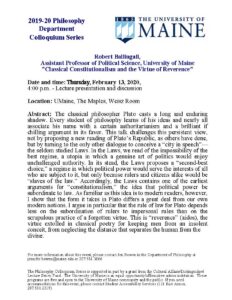 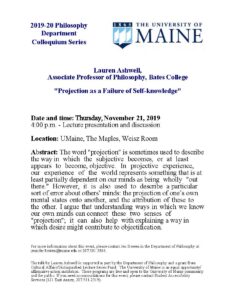 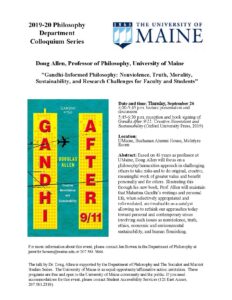 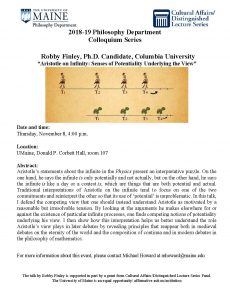 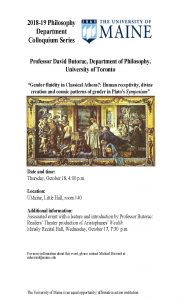 See our UMaine Department of Philosophy, The Maples Facebook site. 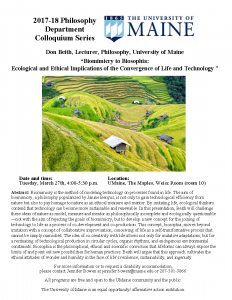 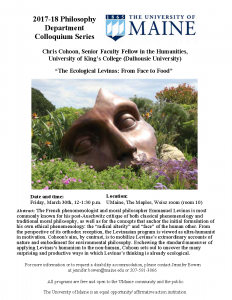 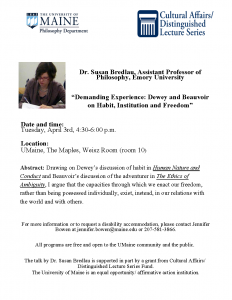 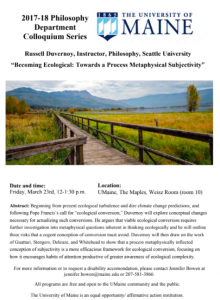 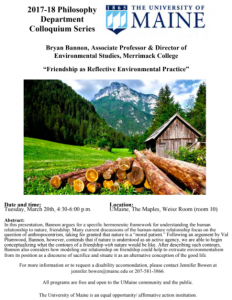 Archive of Past Events

Professor Kirsten Jacobson received the  2015 Presidential Outstanding Teaching Award at the University of Maine, and was the Outstanding Faculty Member in the area of Teaching and Advising for 2015.

Professor Kirsten Jacobson was on sabbatical on a sailing voyage in 2012-13. Here is a story from the Bangor Daily News.

Professor Michael Howard was selected as the Outstanding Faculty Member in the area of Teaching and Advising for 2012.