History of the PDC

The UMaine Process Development Center (PDC) is a unique, open-access research facility where scientists, entrepreneurs and industry leaders work together to develop new products and manufacturing processes. The PDC began many years ago as a small operation in the basement of Aubert Hall, then the seat of the University of Maine’s chemical engineering department. In the 1970s and early 1980s, the facility and papermaking equipment were used primarily for student research and experimentation. The pilot paper machine was a gift from the St. Regis Paper Company to the University of Maine in the 1930s and was used as an educational and research tool.

Close alliances formed among faculty, alumni, and industry leaders create an environment where shared expertise could be applied to solve significant problems. For example, in the 1970s Maine woodlands were decimated by the Spruce Budworm Epidemic. UMaine faculty and staff worked closely with Maine companies to salvage fiber from the damaged trees and to head off economic disaster. Drs. Gerald Simard and Andrew Chase conducted many industrial projects with the paper industry during this period.

In 1986, a large extension was added to Jenness Hall in part through the joint efforts of the Chemical Engineering Department and the University of Maine Pulp and Paper Foundation. This large experimental wing was designed to accommodate the paper technology laboratories still located at Aubert Hall, as well as graduate student laboratories. Through the work of Dr. David Kraske (CHE) and Mr. Stan Marshall (PPF), businesses and private citizens donated funds to upgrade the old machinery and purchase new equipment. The centerpiece of the new addition was the modernization of the pilot paper machine from Aubert Hall, which was relocated to the new facility. 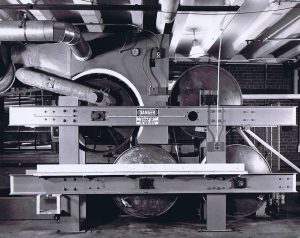 As the Pilot Plant expanded its research and industrial contract work, the revenue was used to hire new staff and purchase additional equipment, slowly increasing the Plant’s analytical and technological capabilities (a series of newsletters from 1986-1989 detailing the construction and equipping of the new wing are available here). Dr. Joseph Genco became Director of the Pilot Plant in 1991. The Plant worked closely with industrial partners to find solutions to the pressing challenges of the day. For example, UMaine researchers helped develop non-elemental chlorine bleaching, a process that significantly reduced dioxin generation and discharges. The process became the industry standard. Together with industrial collaborators, the Pilot Plant developed new processes for non-sulfur and oxygen delignification, optimized use of recycled materials, designed equipment and process changes to reduce emissions, and developed and implemented significant strategies for reducing water, raw material, and energy consumption. These developments benefited Maine companies through economic and environmental improvements while also advancing basic scientific understanding.

Throughout the 1990s, the Pilot Plant continued to grow in capabilities, staff size, and industry notoriety. In 2002, its name was changed to the UMaine Process Development Center to reflect its broader capabilities. As the work expanded in scope and potential, Michael Bilodeau – a former paper industry researcher and University of Maine chemical engineering graduate – was hired as Director in 2003.  The PDC continued to drive innovation and new technology development while continuing to upgrade the facility and capabilities. In 2009, the PDC was awarded a Maine Technology Asset Fund grant through a competitive application process to implement major pilot paper machine upgrades, including an advanced integrated control system, and the installation of a new pilot coater. In 2012, a joint venture agreement with the USDA Forest Service funded the construction of a cellulose nanofiber pilot plant in Jenness Hall. The agreement also supports research to advance cellulose nanotechnology. This new pilot capability enables the demonstration of unique cellulose nanofiber production processes and provides large quantities of material for commercial application and development. 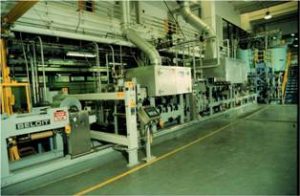 In 2018, Dr. Colleen Walker became the Director of the Center. Dr. Walker is well known in the pulp and paper industry thru her work with TAPPI, most notably with their Nanocellulose Division.  In 2019, the PDC was granted an award from the Northern Border Regional Commission to upgrade the nanocellulose facility to a continuous process.

The UMaine PDC continues to collaborate with industrial partners to meet the emerging and constantly shifting needs of the marketplace. Recent collaborations include efforts to advance fiber processing technologies, develop specialized nanotechnologies, and respond to market demands for sustainable products. New product innovations include a non-toxic grease-proof coating additive, a new class of environmental remediation technology, a unique cellulose insulation product, a novel agricultural mulch, and new bio-based paper strength and processing aids. The PDC is also working with a dedicated group of organizations to help launch a new bioplastics industry in Maine and to engineer plastic from forest and agricultural by-products.

The UMaine PDC helps companies, both large and small, to reach their business goals and objectives by providing open access to all of its resources and support throughout the entire innovation process – from concept development, validation, pilot demonstration, to successful commercialization. While the scope of work and impact of the PDC has greatly expanded over the years, it continues to provide passionate, exemplary service to the public through advanced engineering.