The MSTI 2009 was a great success.  Participants came from 8 Maine middle schools and some were home schooled. Both participants and their parents had great things to say about the program. 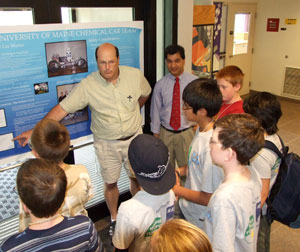 “Our son very much enjoyed the experience at the summer transportation engineering camp.  He also benefited from the experience greatly – both during the camp and in the time since.  While he was in the camp, he described the places he had visited, and he began to talk about things around him in ways he hadn’t before.  For example, in the past he would talk about road construction and his focus was on the people who operated the heavy equipment.  After attending the camp, he has noticed things like grade markers and other aspects of the planning and engineering that takes place behind the scenes on a construction project.

He has also started to notice other things around him in ways he hadn’t before.  On a recent fishing trip on the Penobscot River, he acted as our tour guide as we passed Cianbro’s new facility in Brewer.  He amazed our other boating guests by describing how the platforms are assembled, and then transferred to the barge on the waterfront.  This is a direct result of his participation in your summer program.  At home, we have tried to apply the things he has learned to further motivate him to do his best in math, science, and his other studies.  Finally, he enjoyed the other activities planned for these students, and made several new friends as a result of the experience.”

“I wanted to let you know my son more than enjoyed MSTI this summer. On the very first day he said it was better than any summer camp he has ever done. He usually does sports camps. And even after two weeks he was still enjoying every minute of it. He is sad to think he won’t be able to do it again next year. But he has already recruited one of his friends to try it next year.

He came home every afternoon to tell me how much fun the camp was. He couldn’t just pick one favorite thing that he did. He liked the field trips, classroom time with computers and especially the new friends he made. He is even keeping in touch with a few. So, I can’t say enough great things about this camp neither can my son. The only problem is he can’t decide with type of engineer he would like to be. But this has given him many avenues to look into.”