For Sam Roy, his second visit to Capitol Hill to promote the work of the Mitchell Center and gather support for the reauthorization of the Water Resources Research Act (WRRA) was the charm.

He first went to Capitol Hill two years ago and had to learn the ropes of what was, for him, completely new and challenging work—and a far cry from his previous training and research in fluid dynamics. He met with staffers from Maine’s congressional delegation for short blocks of time to familiarize them with the work of the Mitchell Center and Maine’s Water Resources Research Institute (WRRI), which receives federal funding through the WRRA and is a program of the Mitchell Center.

Says Roy, “The first time I went they were receptive but didn’t seem as familiar with our work and its benefits for Maine, so I had to spend more time explaining  WRRI research and how the WRRA provides funding for faculty and students to help address water resource challenges in the state.”

For his second go-round, which took place recently, the Congressional delegation was more familiar with the Mitchell Center’s work “in not just the water-related topics of research but many others”—for example, the Mitchell Center’s community and economic development work in the Katahdin region led by Adam Daigneault and Linda Silka.

“That was of particular interest to the office of 2nd District Congressman Jared Golden,” Roy says. “But the entire Congressional delegation was very positive and they support appropriation for funding based on the good work we’re doing, and that’s just how they framed it.”

The specific projects Roy emphasized when meeting with the staffers included those on safeguarding shellfisheries (Safe Beaches and Shellfish), improving dam decisions (Future of Dams), and reducing floods and water pollution (Improved Delineation of Natural Infrastructure for Flood Attenuation).

“I also explained how we are building connections between WRRI-funded projects and our National Science Foundation grants, which ensures that ‘the whole is greater than the sum of the parts,’” Roy says.  “In essence, these synergies allow us to do a better job of developing more durable solutions to the water resource problems in Maine.”

While the primary objective of Roy’s trip was to reach out to Maine’s delegation and explain the value of Maine’s WRRI program, a second objective was to meet with the 54 state and territorial WRRI institutes at the National Institutes for Water Resources (NIWR) annual meeting to discuss potential new directions for the program.

The NIWR is currently crafting a new strategic plan that, among other things, incorporates a greater emphasis on stakeholder engagement very much in line with the Mitchell Center’s approach. 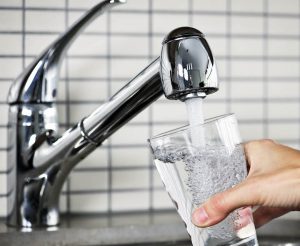 Since its inception in 1964, the NIWR has largely focused on using biophysical research to improve water quality and supply across the nation. “Now there is a greater emphasis on taking a holistic approach to water quality and supply issues by considering watersheds as coupled social-ecological systems where stakeholders are key to finding solutions to these challenges.” He adds, “There’s growing support from each institute for this new approach – an approach in which the Mitchell Center is considered a trail blazer.”

This view was echoed by Sam Fernald, Director of the New Mexico Water Resources Research Institute and Past President, National Institutes of Water Resources, who believes “The Mitchell Center’s innovative approach to stakeholder-driven, interdisciplinary science is a valuable model for other research institutes seeking to improve the management of water resources.”

In terms of his own professional growth, Roy says the two trips to the Hill helped him to communicate about the Mitchell Center’s research to a much wider audience for different purposes.

“This was an opportunity to explain the value of federal support for scientific research, which I don’t often talk about,” he says adding, “I do write grant proposals for federal funding but it’s a rare opportunity to discuss the implications of that with our political leaders, so this is a new experience and I’ve been able to learn a lot.”

One thing he’s gotten better at through the experience is being able to piece things together to provide more of a story about the research, its importance, and the solutions it is working towards.

“I didn’t go in with a spreadsheet, although I’d throw in numbers, really useful numbers, like the shellfish industry accounts for $56 million of Maine’s economy. That’s something tangible they can hang on to,” Roy says. “I also explained the rules used by the Maine Department of Marine Resources (DMR) to close clam flats when rainfall exceeds specific amounts in a 24 hour period. Those kinds of details are very helpful for getting them engaged.”

A staffer for Senator Collins was particularly interested in the shellfish work. “She was new and surprised by the connection with DMR on the closure side of things. And Representative Pingree’s staffer was especially interested in the food waste work done by Mitchell Center researchers.”

All of which points to Roy’s newfound skill of being able to “pivot” to important Mitchell Center projects and topics that are not water-oriented for the brief time he has the ears of staffers.

“It was important to be able to do that pivot just to extend the conversation. You get just a few minutes of their time, and that’s a lot for them, so switching to other research topics is almost an effort to sweeten the deal in a sense, let them know we’re not just focused on water research.”

Indeed, Roy adds that the stakeholder-engaged, interdisciplinary, solutions-driven focus of the Mitchell Center’s work has “always” made it an easy sales pitch for him.

“This is a big reason why I wanted a job at the Mitchell Center. It’s never been so easy to make your research relevant, useful and important. Because it is, we’re doing things that can actually help people.”