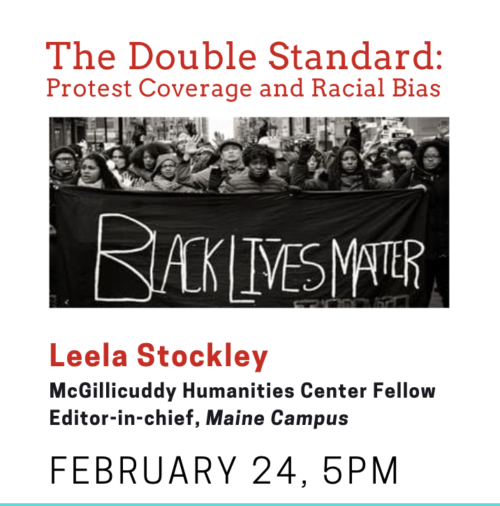 Mass media has a long arm, and a national influence over public opinion of social issues. When protests broke out across the country recently in support of the Black Lives Matter movement, newspapers were quick to try to show the ‘true’ nature of these demonstrations. However, in trying to show news consumers what they wanted to see, reporters got caught up trying to create angles and portrayals of protestors that escalated racial tensions.

McGillicuddy Humanities Center Fellow Leela Stockley will present her research on racial bias in the media in relation to recent Black Lives Matter protests on February 24 at 5 p.m. as part of Black History Month. Stockley, who is a journalist of color and the current editor-in-chief of the Maine Campus, will highlight not just the problematic language and images used in the press to depict protestors, but also how those biased reports affect marginalized communities. She will also provide advice for how journalists can report on social justice movements in the future in a more equitable manner, and how the public can identify racial bias in the media they consume. She will also discuss plans for an upcoming podcast on the subject of the same name. Register here for the link to join.