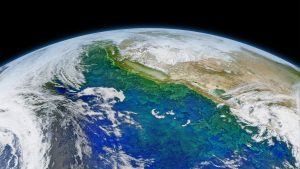 University of Maine scientists are part of an interdisciplinary research team equipped with advanced underwater robotics and analytical instrumentation that will set sail in August from Seattle to the northeastern Pacific Ocean.

They’ll examine the life and death of plankton — microscopic organisms that are the base of the ocean food web and play a key role in removing carbon dioxide from the atmosphere and oceans. The researchers seek to better understand how the planet is changing in response to the increasing amount of greenhouse gases.

Boss and Haentjens will be aboard the Roger Revelle and Perry will be on the research vessel Sally Ride.

From these seaborne laboratories, they’ll examine plankton as well as the chemical and physical properties of the ocean from the surface to 3,200 feet in depth. That’s called the twilight zone, a region with little to no sunlight, where carbon from plankton can be kept out of the atmosphere for decades to thousands of years.

Boss and Karp-Boss, who are co-principal investigators of an Oregon State University-led portion of the project, will examine with Haentjens how phytoplankton community properties determine the movement of organic carbon from the ocean surface to the twilight zone.

“We apply state-of-the-art imaging and optical sensors to study phytoplankton communities, building on capacities that we developed for another NASA-funded study (North Atlantic Aerosols and Marine Ecosystems Study/NAAMES) in the North Atlantic Ocean,” says Karp-Boss. “Now we have the opportunity to study a contrasting system in the Pacific Ocean, so I’m very excited about this opportunity.”

Boss says the project could yield exciting, new perspectives and that researchers could learn in ways they didn’t anticipate prior to being at sea for nearly a month.

The data, he says, are likely to improve models, including those in the Intergovernmental Panel on Climate Change reports. “It is hoped the public and politicians may make decisions based on these models to mitigate climate change,” Boss says.

Perry, the former director of the Darling Marine Center, is a co-chief scientist on the project. She’s been involved with planning EXPORTS since 2014, soon after its inception.

Perry’s a co-principal investigator on a University of Washington-led portion of the project. “My science role is to coordinate calibration of the autonomous robots that will be deployed a month before the August cruise and that will continue to make measurements for months after the ships head home,” she says.

For additional details, read the National Science Foundation release or the NASA release.