The AHA issued a statement condemning “the actions of those who, on January 6, stormed the United States Capitol, the seat of the nation’s legislature, the heart of its democratic form of governance.” The AHA deplores the “inflammatory rhetoric of all the political leaders who have refused to accept the legitimacy of the results of the 2020 election and thereby incited the mob.”

29 organizations have signed onto the statement.

The American Historical Association condemns the actions of those who, on January 6, stormed the United States Capitol, the seat of the nation’s legislature, the heart of its democratic form of governance. This assault on the very principle of representative democracy received recent explicit and indirect support from the White House and from certain senators and representatives themselves. Not since 1814, when the British looted and burned the Capitol, has the United States witnessed such a blatant attack on the “People’s House.”

Everything has a history. What happened at the Capitol is part of a historical process. Over the past few years, cynical politicians have nurtured and manipulated for their own bigoted and self-interested purposes the sensibilities of the rioters. We deplore the inflammatory rhetoric of all the political leaders who have refused to accept the legitimacy of the results of the 2020 election and thereby incited the mob-and this on the day when the nation reported 3,865 COVID-19 deaths, the highest number reported in a single day since the pandemic began.

We note with dismay the iconography of the banners carried by the mob—the flag with the visage of the president emblazoned on it, as if loyalty were due an individual and not the rule of law, and the flag of the Confederacy, signaling violence and sedition. Not by coincidence, those people who attacked the Capitol have been described by the current president and his advisers as “great patriots” and “American patriots.” The rioters were neither.

A day that began with two significant “firsts”—the election of Georgia’s first African American senator and that state’s first Jewish senator—ended with Congress performing its duties according to the Constitution. Yet during the day we witnessed the unprecedented spectacle of a group of Americans desecrating the sacred space of the nation’s Capitol, and terrorizing everyone in it.

As historians, we call upon our fellow citizens and elected representatives to abide by the law and tell the truth. Our democracy demands nothing less of ourselves and of our leaders.

The following organizations have cosigned this statement:

For teaching resources related to this topic:
https://www.historians.org/news-and-advocacy/everything-has-a-history/the-assault-on-the-capitol-in-historical-perspective-resources-for-educators

The History Department at the University of Maine offers both undergraduate and graduate programs leading to the degrees of Bachelor of Arts, Master of Arts, and Doctor of Philosophy.

We offer a wide variety of chronological, geographical, and thematic courses that enhance individuals’ understanding of themselves and the contemporary world by expanding their experiences to include the experiences of other peoples, both past and present. These courses range from ancient times to the present, cover most geographical regions of the world, and allow topical specialties ranging from women’s or environmental history to the history of technology or labor history. History graduates find employment in a wide range of occupations. Traditionally they have gone into teaching and education careers in primary and secondary schools and, with appropriate graduate-level training, colleges and universities. More recently, increasing numbers of history graduates are finding their way into private and public non-profit organizations and agencies, such as museums, archives and libraries, research and service institutions, legislative bodies, and planning agencies. Others find career opportunities in the private sector, including publishing, journalism and broadcasting, and law firms; in fact, history is an ideal pre-law major.

The History Department is very sad to announce the passing of our longtime friend and colleague, Professor Howard P. Segal.  Howard joined us in 1986 and became one of the nation’s leading historians of technology.  He was author of several books including Technological Utopianism in American Culture (1985), Technology in America: A Brief History (with Alan Marcus) (1989), Future Imperfect: The Mixed Blessings of Technology in America (1994), and, Recasting the Machine Age: Henry Ford’s Village Industries (2001).  Howard leaves behind his wife, Deb Rogers, and his two children, Rick and Raechel.  All of us in Stevens Hall will miss Howard very much.

Please click below to see what our faculty and students are doing.

Statement Regarding the Protests Against Racism and Police Violence

History is Not a Useless Major by Paul B. Sturtevant

A lecture on the diversity and significance of Maine’s heritage, by Professor of History, Dr. Liam Riordan, and publicized by the UMaine Alumni Association: https://vimeo.com/470606098 How to Contribute to the UMaine History Department

Please consider making a contribution to the History Department to help the University of Maine fulfill its mission as a land-grant institution while raising its profile at home and abroad. Donations can be made here. 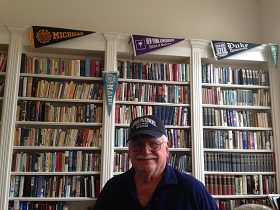