October 26, 2017 In the News, Maine Schools in Focus, News, Research and Outreach, School of Learning and Teaching 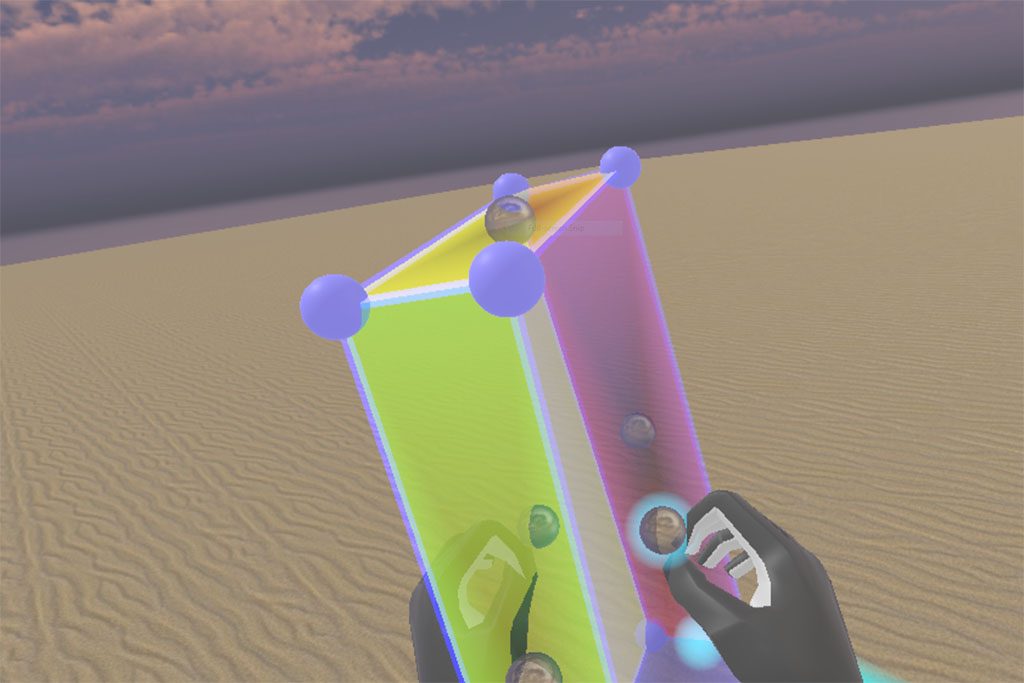 Teachers are beginning to explore how virtual reality can transform instruction. Much of this early work has revolved around phone-based virtual reality viewers, such as Google Cardboard or Gear VR by Samsung. These devices provide the viewer with an immersive, first-person perspective on a virtual world—a personalized, 360 degree, three-dimensional movie. With such viewers, students can take virtual field trips to far away places, or visually investigate virtual mathematical worlds that would otherwise be impossible to experience.

But virtual reality viewers are limited. They are essentially digital, customizable ViewMasters. Room-scale virtual reality (VR), by contrast, provides aural, visual, motile, and (some) tactile immersion for participants wearing a head-mounted display, such as the HTC Vive. In room-scale VR, you can walk closer to or farther from a virtual object, and your visual perception of the distance you are traveling will adjust accordingly. It’s as if you were on the holodeck of a starship, except it’s not science fiction. The technology is commercially available at costs that are comparable to other classroom technology enhancements (e.g., smartboards).

These technologies have the potential to transform how we generate, disseminate, and interact with knowledge. For example, students working in an immersive, three-dimensional environment had a better grasp of chemical reactions than students who investigated such relationships on two-dimensional screens (Limniou, Roberts, & Papadopoulos, 2008). Older generations of virtual reality have been confined to research laboratories, but with the commercial availability of room-scale virtual reality, these technologies could transform K-12 education in the coming years.

The University of Maine IMRE Lab (located in the College of Education and Human Development at Orono, ME) is working to harness the potential of room-scale VR to design learning environments for mathematics and science education. One of our current projects is HandWaver, a virtual mathematical making environment that let’s people use hand gestures to construct figures in a virtual, three-dimensional space. Gesture-based user interfaces have been shown to minimize cognitive barriers to using technology (Zuckerman & Gal-Oz, 2013). In HandWaver, learners at all levels can use their hands to act on mathematical figures directly, without the need for equations, keyboards, or mouse movements. HandWaver combines aspects of dynamic geometry in virtual reality with new modes of building mathematical objects, such as the ability to use one’s hands to stretch objects between dimensions—e.g., points can be stretched into line segments, segments can be stretched into plane figures, and plane figures can be stretched into solids. We developed HandWaver to increase access to meaningful mathematical experiences for all learners. The development of the environment is ongoing, but the latest released version is available at www.handwaver.org.

Through our work to investigate how room-scale virtual reality can be used as an instructional technology, we recently installed two HTC Vives at the East Grand School in Danforth, Maine. East Grand is a pre-K-12 school that serves 150 students. Jennifer Gilman, a mathematics teacher at the upper school and University of Maine alumna, is excited by the transformative potential of virtual reality. “I could immediately see its potential in the classroom. The rural isolation of our school provokes me constantly to think how I can bring the world to my students,” said Jennifer.

Jennifer was introduced to virtual reality by Camden Bock, a research assistant for the Umaine IMRE Lab, while she was attending a summer institute at the University of Maine Research in STEM Education Center. Her school was awarded a Kepware Grant that funded the purchase of the virtual reality equipment, with additional support from the GEAR Up program at East Grand School. The technology was installed by the IMRE Lab in early October. As part of the installation, the IMRE Lab trained a group of East Grand students, known as the Dream Team, to handle the day-to-day upkeep of the equipment. In the coming weeks, Jennifer and the Dream Team are excited to work with the faculty at East Grand, many of whom are eager to incorporate immersive, dynamic virtual experiences into their teaching.

Room-scale virtual reality is a new medium for displaying and interacting with information. It can allow us to see and touch things that, until recently, had been purely theoretical, and to visit places that would be impossible to experience otherwise. In subjects like mathematics, immersive virtual reality has the potential to allow students to use their spatial intuitions to access deep mathematical ideas. The Umaine IMRE Lab is excited to be working with Maine teachers to harness the potential of this transformative technology. For more information about our work, please visit www.imrelab.org.