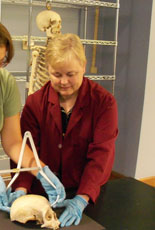 The Forensic Anthropology Laboratory is the center for conducting research on human osteology, bioarchaeology, forensics, and taphonomy. The lab is also the focal point for training undergraduate and graduate students in the major methods and techniques used in forensics. Research and training is designed to prepare students in the analysis human remains in forensic, modern, and prehistoric situations with a particular eye toward taphonomic assessment. The forensic laboratory contains an extensive comparative human skeletal collection representing individuals from fetal to older adult as well as males and females. The lab is currently being developed and will be equipped with the necessary tools with which to conduct modern forensic analyses.

The Forensic Anthropology Lab is directed by Dr. Marcella Sorg. 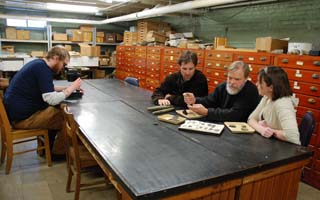 The Northeastern Prehistory Lab in South Stevens Hall is the center of research and analysis of archaeological remains from prehistoric Maine and the Maritimes. Research on materials excavated more recently are compared with remains recovered in the past to develop broad-based ideas on the prehistory of Maine and the Northeast, and how these people lived and interacted with each other and with surrounding groups. The lab is one of three Federal Repositories of Archaeological material in Maine, and contains extensive collections developed by a number of researchers for over four decades.

The lab contains an extensive collection of prehistoric Northeastern artifacts spanning the temporal range from 12,000 years ago up to the more historic present. The lab has storage space, analysis space, a wet lab, flint knapping room, and a dark room. The collections are overseen by a Laboratory Manager.

Projects carried out in the Northeastern Prehistory Lab include:

The Northeastern Prehistory Lab is directed by Dr. Brian Robinson. 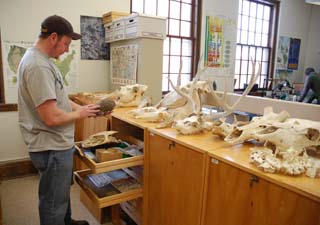 The Zooarchaeology Laboratory is the center for training undergraduate and graduate students in the major methods and techniques used in archaeological faunal analysis. Research and training is designed to prepare students in the analysis of animal remains from archaeological sites, and from these analyses infer past lifeways, paleo-environments, and prehistoric human adaptations. The zooarchaeology laboratory contains an extensive modern comparative skeletal collection of northeastern and southwestern fauna. The lab is equipped with the necessary tools with which to conduct faunal research, including a fume hood, Nikon microscopes, computers and spaced for analyses and storage. Projects currently being conducted in the lab:

The Zooarchaeology Lab is directed by Anthropology Staff. 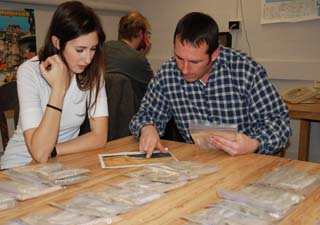 The Latin American Archaeology Lab is dedicated to the investigation of the human past among Mesoamerican and Andean South American societies. This includes, but is not limited to, pre-European complex civilizations of Mexico, Belize, Guatemala, Ecuador, Peru, Bolivia, and Chile; the impact of European colonization on indigenous populations; and the manners in which human societies past and present manipulate their physical surroundings, and the impact of their ‘legacies’ in contemporary landscapes of Latin America.

Students in the lab are involved in a variety of activities that include: 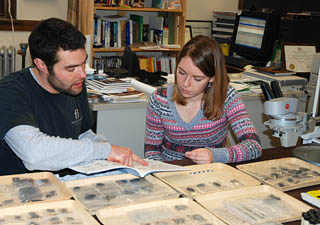 The South American Archaeology Lab in South Stevens Hall constitutes the primary work space for a growing team of researchers investigating the quaternary and human prehistory of South America. The lab contains two computers (Mac and PC), Geographic Information System software, flatbed photo and slide scanners, a printer, two microscopes, an extensive library of archaeological and quaternary science books and journals, and an archive of South American maps and air photos. The lab also houses a robust malacological reference collection and selected archaeological materials from UMaine excavations on loan from Peru. Aside from regular research functions, the lab is used for the preparation of archaeological materials for rock provenance studies, prehistoric artifact analyses, and archival preparation.

Projects carried out in the South American Archaeology Lab include:

Each of these projects grows out of extensive field work by UMaine researchers in South America—our teams launch one or more expeditions every year to gather new information about ancient Americans and their world.