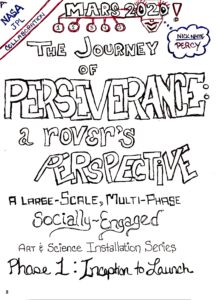 Soule presented two separate projects at the UMaine Student Symposium 2021. The project “Whites Only,” advised by Owen Smith, won the arts category award for graduate students. The winning project is a “collaborative video performance/installation that touches on white privilege and assimilation to white culture and systemic racism in America.” Along with collaborators Derek Smith and Stanley Levitsky, the project is an art installation and video performance that “illustrates how certain racist behaviors are deeply integrated and accepted within our societal norms.”

Soule’s second submission is no less intriguing. Titled “The Journey of Perseverance—A Rover’s Perspective” the project is a large-scale art and science installation series. It will showcase a personified visual narrative of Perseverance Rover’s perspective and experience traveling through space and on Mars. Soule’s mentor on this project is the director of the Versant Power Astronomy Center and Maynard Jordan Planetarium, Shawn Laatsch.

As a graduate student in the Intermedia MFA and accounting MBA programs at the University of Maine, Soule has learned technical and art-making skills that will help create five interactive installations. The installations are designed in alignment with NASA’s strategic plan to engage the public in space exploration. Her work will feature a series of interdisciplinary art pieces, including videos and animations projected onto the Versant Power Astronomy Center and Maynard Jordan Planetarium at UMaine, a sculpture with accompanying artist book, educational webinars and workshops, a “Mars Mission Ambassador Passport”, and set of artist multiples, which are series of identical art pieces for distribution. Soule shares a video presentation overview of this project at the UMaine Student Symposium ‘21 and hopes to complete the installations by August 2021.