Dr. Ranasinghe is an Assistant Professor in the School of Computing and Information Science and is affiliated with the Spatial Data Science Institute which is the successor to the National Center for Geographic Information and Analysis (NCGIA) at UMaine. He joined the School at the beginning of 2018. Previously, he worked as a Research Fellow at the National University of Singapore and the New York University (NYU Abu Dhabi).

Dr. Ranasinghe’s research interests include Multisensory Interactive Media, Augmented Reality, and Human-Computer Interaction. He is well-known for his Digital Taste (a.k.a. Virtual Flavors) and Virtual Cocktail (Vocktail) inventions and featured in numerous media around the world including New Scientist, NewYork Times, Time Magazine, BBC Radio, Discovery Channel, and Engadget. Furthermore, he has published his work in several prestigious academic conferences and journals including ACM conference on Human Factors in Computing Systems (CHI), ACM conference on Multimedia, and Journal of Human-Computer Studies. He has received numerous awards for his research works; in 2014 his work on Digital Lollipop was selected as one of the ten best innovations in the world by the netexplo forum in UNESCO HQ, Paris.
Youtube channel 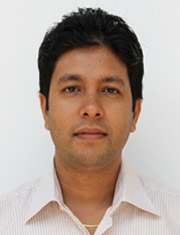