Establish an innovation-driven Maine economy for the 21st century

Through R&D, Maine’s universities have a direct role in improving the economy. A strong R&D base can help attract new industry, support the expansion of  businesses and industries that are here, spin off new startup companies, and enable the education of an innovative workforce. The Board of Trustees has  identified this as a key role of the System in Maine’s economy: “The state of Maine has charged its higher education institutions to work together cooperatively with Maine businesses to advance the Maine economy.”xliii The Board also acknowledges the role of R&D: “And the System must continue to grow the research and knowledge base that will support those emerging workforce and business needs to enable and even catalyze innovation in Maine.” Growing the knowledge base, and expanding capacity in the state for business-related R&D through the System, are critical catalysts for the economy. 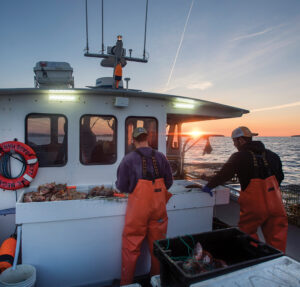 Gross domestic spending on R&D as a percentage of gross domestic product (GDP) for a country or a state is considered to be a leading indicator of economic success. Fortunately, for the past two decades Maine has steadily increased its investment in R&D, recognizing the importance of this to growing the economy. However, according to the Maine Development Foundation in the 2018 Measures of Growth update, “Maine has historically devoted less than one percent of our total gross domestic product to Research and Development Expenditures, below the U.S. average and well below the New England average.” The report authors continue, “R&D spending supports innovation, the ultimate driver of most economic growth,” and note that “Maine’s total spending on research and development was approximately 0.9 percent in 2015. The [Maine Economic Growth] Council’s benchmark is 3 percent by 2020.”xlvi

Nationally, almost two-thirds of academic R&D spending goes to basic research, largely through federal grants and awards. Applied research constitutes 28 percent and development 9 percent. In Maine’s case, MEIF funds are directed by statute to support applied research and development. At the same time, any overall increase in R&D expenditure that preserves the important university role in basic research will require the universities to increase their capacity for external funding, largely from the federal government.

With additional resources and capacity from the state and the System, and from within the universities, our productivity in seeking and receiving external grants can increase. In terms of real-dollar federal funding obligations for science and engineering R&D, Maine ranks 47th among states in external funding from federal agencies (compared to New Hampshire at 34th). Of particular concern are the state’s rankings with U.S. Department of Agriculture and National Science Foundation at 48th.xlviii Additional external support also would provide funding for more graduate students. According to the same federal data, among states and localities, including Washington, D.C. and Puerto Rico, Maine ranks 51st in total number of sciences, engineering, and health graduate students, and 52nd in science, engineering and health postdoctoral appointees.xlix There are few appropriate placements for postdoctoral scholars across the System and, at present, opportunities are limited to UMaine. For Maine, increased federal funding allows for support of more undergraduates in paid internships and lab experiences, tuition support for graduate students, expertise, and facilities to be shared with current and potential academic, business and industry partners.

Nationally, distribution of academic R&D expenditures is shifting, with life sciences receiving the largest share (57 percent) in 2016, followed by engineering at 16 percent.l Within engineering, the growth areas are bioengineering and biomedical engineering, and both fields are currently very strong in Maine. Other non-science and engineering fields, such as education, business, and the humanities, accounted for just under 6 percent of total academic R&D spending.li Those fields are critical to enhancing the quality of Maine as a place to live, work, and learn, and, thus, will need more state and institutional support.

In comparison to other states, Maine is still building its industry-led R&D. Historically, the focus in this state has been on agriculture, forestry and timber, fisheries, and manufacturing. Although many of our industries are R&D dependent, often that R&D is occurring at national and international headquarters, rather than in Maine. Yet at UMaine and across the System, research and development are underway that support growing and emerging business here, ranging from aquaculture, to repurposing of forest biomass, to renewable energy, to cellulose nanomaterials, to biomedical engineering, to aging. One way that universities can help draw business to Maine is to have the students, faculty, and facilities available to support targeted applied research, development, and incubation activity customized to industry needs and expectations. University-private sector partnerships can be developed to support research and development of interest to Maine industry. These types of partnerships can further build R&D connections, expand specialized capacity for development, and help establish workforce pathways. The UMaine University Research Council produced a plan in 2012lii that included a goal to “increase industry-funded research projects from the FY10 level of $4.5 million to $9.0 million by FY17.” UMaine has not achieved that goal; in FY18, partnerships are at about $5 million. We can help to grow jobs and new business by having an attractive R&D ecosystem for Maine, with System institutions playing a central role.

In 2014, Richert advocated for increased R&D spending by businesses in the state of Maine in the frequently cited 30 and 1000 report.liii The report projected that “if 30 percent of the state’s adults had at least four-year degrees, and if businesses, academia, and government were spending $1,000 per employed worker on research and development, Maine’s per capita income would reach the national average.”liv This would rest on a combination of higher education, state, and industry R&D investment. Richert recommended two pathways to enhance industrial investments in R&D in Maine: First, “retool sectors in which Maine has been traditionally strong […] but that are typically low R&D performers” (e.g., the wood products sector, as it shifts to engineered wood composites and forest bioproducts); second, to work with sectors that are “high R&D performers […] in which new technologies and applications provide new options for Maine businesses to penetrate the sectors,” (e.g., pharmaceuticals, or chemical, biological, and particle-detection and analytical instruments).lv System institutions already have been instrumental in the first, and are well poised, in partnership with the state and the private sector, to advance the second.

Essential to enhancing statewide R&D expenditures and impact on the economy is a robust, coordinated approach to innovation derived from all forms of research activity, and engaging students in that activity as preparation to be future leaders in Maine. This means cultivating innovators and entrepreneurs, supporting the identification and disclosure of intellectual property, enabling spin-off and spin-out companies growing out of university-based research, developing product development collaborations, and facilitating licensing agreements with commercial partners. In addition, partnership with the outstanding Maine research laboratories and private universities can expand the impact of work based in the public university system. There is federal support for promoting growth of small businesses through the Small Business Innovation Research program (SBIR) and the Small Business Technology Transfer program (STTR). In 2014–16, Maine ranked 35th of 52 states and territories nationally in SBIR/STTR receipts, up from 38th in the 2012–14 data. This is encouraging and is an area on which to build. At other points in time, Maine has been significantly higher in the table (13th in 2004–06, 15th in 2006–08; above the national average in both instances).lxviii This suggests that, relative to the overall economy of Maine, federal funding for commercialization and small business expansion represents a meaningful opportunity for growth. The universities can be very helpful partners in these ventures, and can provide pathways for student engagement that could lead to new and expanded business in Maine.

In Maine, patent activity has increased dramatically over a 50-year span. Between 1963 and 2015, patent filings in Maine per capita increased 215 percent, an increase in keeping with growth in the top third of all states with increased filings. There is still ample growth potential in Maine. Although this increase outstripped Connecticut and Rhode Island, it still substantially lagged New Hampshire and Vermont.lxix Promoting further activity would involve increased patent applications coming through the System, and also through companies whose corporate headquarters are in Maine. In recent years, UMaine has been the source for the majority of patent disclosures and new companies launched on the basis of university research. Today, UMaine, Maine Center Ventures, and the University of Southern Maine all are engaged in supporting business incubation, acceleration, and commercialization that impact Maine’s businesses in critical ways. There is great demand from students and private-sector entities for expansion and statewide access to these opportunities.

Increase total R&D expenditures across all sources in Maine to 3 percent of Maine’s gross domestic product by FY30.