This winter, University of Maine graduate student Kit Hamley will research an extinct species of fox called the warrah in the Falkland Islands.

While on her expedition, the Bozeman, Montana native will connect with K–12 students in Maine and around the country through Twitter chats as part of UMaine’s Follow a Researcher program.

From Jan. 14 through Feb. 13, participants will watch as Kit Hamley, who is pursuing a master’s degree in quaternary and climate studies, travels 300 miles off the southeastern coast of South America to the Falkland Islands to research the animal.

The warrah, Hamley says, was the only native terrestrial mammal in the Falklands at the time of European arrival in the 1760s, and the last one was hunted to extinction in 1856. Using field and laboratory techniques, she hopes to learn how and when the animal arrived in the Falklands.

“By integrating, using and fusing these three different disciplines, I’ll really be able to begin diving into my hypothesis, which is that perhaps humans had reached the islands before Europeans got there, and perhaps just as we do today with our dogs, they decided to bring the warrah along with them and then had to leave it in the islands for whatever reason,” Hamley says.

This will be Hamley’s second research expedition to the Falklands, as well as her second experience with Follow a Researcher.

How will this trip to the Falkland Islands be different from your last?
I went on a trip to the Falklands last December. That trip ended up being a really valuable trip for figuring out how research in the Falklands works. It is difficult to plan and execute an expedition from far away and have it be 100 percent successful. We had high expectations for the last trip and ran into a lot of challenges in terms of what samples we were able to collect. Now we have the valuable knowledge and are better prepared for this expedition. 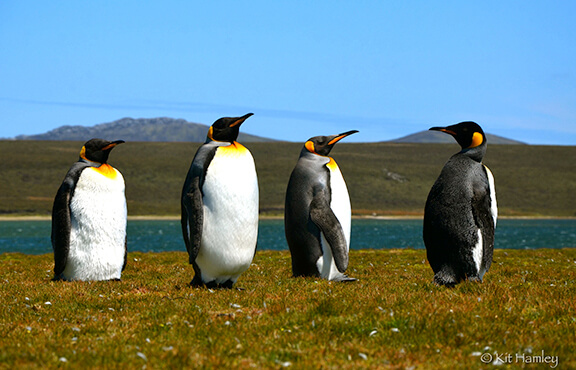 I also am a year further into my research so my project is much more developed, so I am more prepared in terms of knowing exactly what data I want to collect and where I want to collect it from. We also have a new corer that will be able to get through the extremely dense peat that is present throughout the islands, so we are more prepared with our research equipment, as well.

This trip will also be different in the sense that I will have a lot of virtual followers from the Follow a Researcher program, which I am thrilled about.

Describe your role in the last Follow a Researcher (FAR) expedition:
On the last expedition, I was part of the two-person research team that was coring ice in Peru. Charles Rodda was the primary researcher and I was there as a research assistant. So I wasn’t as directly involved in the FAR program since it was more or less born right before the expedition left.

On the trip I helped field a lot of the questions that kids were asking and did most of the typing because I had faster/smaller fingers for typing on the tiny keypad, and we had to keep up with all of the questions coming in.

I feel so lucky that I got to go on that expedition because I got to experience a new field of scientific research, it was an incredible adventure and it connected me to the FAR program, which I immediately fell in love with.

From our end of things, the FAR Peru program was us huddled on a glacier fielding incoming questions from K–12 students. We had no idea how they were using the program in the classroom.

When we got back to Cusco after six weeks in the field, we saw a WABI-TV news piece where they had visited Hudson Elementary School during one of the live Q&A sessions with us. It actually brought tears to my eyes to see the interviews with the kids who had been following along and to hear about all they had learned and to see how they had been interacting with the program.

I think I was extremely exhausted from the expedition, but I also think it is a really powerful thing to take what you love doing and share that with kids in a meaningful way and to inspire them.

What was your favorite part of being involved with the FAR program?
Getting back to Cusco and seeing how the students had been using and interacting with the FAR program made the research feel so much bigger. I have found that has been true for my research as well during this year’s FAR.

Getting to share my research with kids makes my work feel more meaningful. I think part of that comes from looking at my research through their eyes. I have to be able to explain what it is I do to 7-year-olds, which means that I have to look at it from a new and different perspective and that makes it really exciting.

Why did you decide to take part again?
I knew from my experience with the FAR program in Peru that this was in a way, sort of my calling. I have always loved to teach but I also love being a scientist. This program perfectly fuses those two passions and I knew that I wanted to be part of that.

At a meeting after we got back from Peru, I showed the other FAR folks a picture of some penguins that I took in the Falklands, and said “Want to go to the Falklands next?” and there was a resounding “Yes!” and it’s been history since that.

We have had a lot more time to prepare for this expedition and we have the Peru experience to build off of, so I am excited to see how FAR Falkland Islands goes.

What are you most looking forward to this time?
I’m looking forward to everything about it. I have started classroom visits and have had an absolute blast so far with those. I’m excited to get to make connections with students before, during and after the expedition. 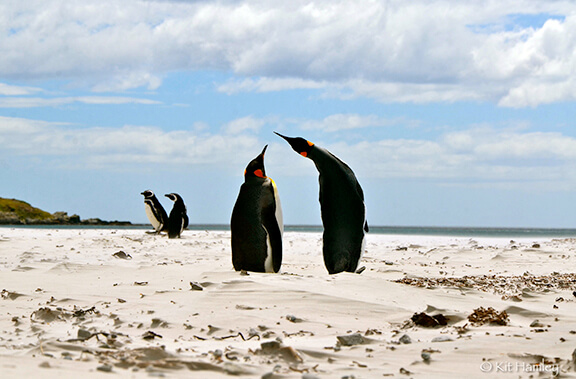 Sometimes this is hard to do, because scientists I think have a bit of a reputation for not being the most accessible people in a lot of ways. I want the students to feel comfortable with me, and not think of me as a scientist, but as a normal person, who also does cool science.

I try to emphasize that in my classroom visits, that I am a person who likes to ski, whitewater kayak, raise chickens, and has a cat who likes to go on adventures. It’s my hope that if they can connect to me, then it’ll make becoming a scientist seem more achievable for them. I also am looking forward to getting to connect them to the Falkland Islands, which are amazing.

What will you do differently?
There are a number of things we are trying to build on from last time. That being said, last time was an incredible first run of this program and blew any expectations that anyone had for it out of the water.

I am trying to fit in as many classroom visits as possible beforehand. I have six schools lined up right now and more than 20 individual classrooms, which I am thrilled about.

I think that making a personal connection with the students will make a huge difference to how invested they are in the rest of the FAR program. I also think that personal connection is immensely important for showing the students that scientists can be accessible, fun, adventurous people and that they can become scientists too if they want to. This is a message that I am really hoping inspires all students, and especially girls. I’m hoping that seeing a female scientist role model will inspire girls to pursue science.

I also will try to follow up after the expedition with as many classrooms as possible, especially those that really actively participated. We are also going to do a final celebration at the Maine Science Festival in Bangor on March 18.

We are trying to make a lot of the video modules — that get released for classroom use each week of the expedition — more interactive and engaging. Making the FAR program materials as easy to integrate into classroom curricula as possible is one of our major goals.