New internship program empowers the next generation of sustainability leaders 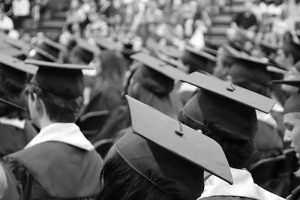 Conjure an image of the prototypical intern: you might imagine a bored 19-year-old fetching coffee and making photocopies, or you might imagine that student struggling to do the work of a full-time professional for free. In these scenarios, interns are either tossed in head-first or beached. Last summer, however, students in the Mitchell Center’s pilot internship program were taught to swim. They were challenged to work with faculty, stakeholders, and each other to tackle real issues facing communities in their backyard, all with the necessary funding, research training and mentorship to promote their success.

“Unless you’re asking questions that mean something to people who are going to use your research … it’s going to sit on a shelf and collect dust,” Dr. Jessica Jansujwicz said. “That was the idea behind these hands-on, practice-based internships, trying to work directly with stakeholders as well as with faculty to build these strong connections.”

Jansujwicz, a social scientist whose work often focuses on the intersection of conservation science, communities, and policy, led the pilot internship program through its inaugural year. The program grew out of discussions with Mitchell Center faculty about ways to provide graduate and undergraduate students with unique opportunities for professional and personal development. The Mitchell Center is focused on launching and supporting collaborative, solutions-driven research that involves stakeholders, crosses academic disciplines, and directly benefits local communities. An internship program that combines these elements seemed to be the perfect way to engage students in such work while facilitating their professional and academic growth. Student projects in the pilot program addressed challenges like barriers to diversity, equity, and inclusion in outdoor recreation, removing plastic waste from restaurant supply chains, addressing gaps in training for Maine’s young fishers and aquaculture farmers, and using Geographic Information System (GIS) tools to support community-level decision-making on Maine’s Bold Coast.

Prior to embarking on their own projects, the interns participated in several trainings with Jansujwicz focusing on science communication, facilitation, leadership, and “how to be an intern”— which helped students understand the differences between working in and outside of academia. Interns across academic levels, from rising sophomores to master’s degree students, spoke highly of the training program and how it helped them communicate their research to those not familiar with their disciplines. Amy Dowley, a graduate spatial informatics student, spent her summer building GIS tools to support municipal planning in Washington County. Having the tools to confidently communicate the usefulness of the maps she created and solicit feedback from municipal officials in remote meetings was invaluable.

“I learned a great deal about how to present and share content effectively online with community members that had mixed levels of familiarity with GIS but lots of experience to offer about their own communities,” Dowley said.

Many of the graduate and undergraduate interns were paired on their projects, and such was the case with Dowley and Austin Simmons, an undergraduate student at the University of Maine’s regional campus in Machias (UMM). Many towns in the Bold Coast region, which runs from Milbridge to Eastport, struggle to access the information that they need to make informed planning decisions for their communities. Representatives from the Sunrise County Economic Council (SCEC) brought that concern to the UMM GIS Laboratory and Service Center with hopes of fostering a partnership to provide municipal officials with access to information and visual tools to support their decision-making processes. Dowley and Simmons, with support from professor Tora Johnson, worked together to meet that local need.

Simmons and Dowley created maps to communicate information about traffic patterns, marine resources, soils, land cover, recreation and public facilities, and projected sea level rise. Many of these maps are required for towns’ comprehensive plans by the state. The interns shared their work and collected feedback during weekly Zoom meetings with town officials and the SCEC, and through email, shared Google Drives, and Google Calendars.

SCEC Community and Economic Development Planner Elaine Abbott noted, “Jonesport was able to use [these maps] immediately because they were looking at a 15-17 million dollar infrastructure project that could be directly impacted by sea level rise.” Simmons’ and Dowley’s map of projected sea level rise was integral to their process of considering whether to move forward with the project.

Jansujwicz said that projects like Simmons’ and Dowley’s succeeded in having an immediate impact on their stakeholders because the interns did not approach their projects with fixed notions of what would be best for the communities. Instead, they asked questions early on and even as they began to craft solutions and products, they sought feedback to improve their process.

“It wasn’t that researchers spent two or three months doing something that they thought would be useful; I think from the very start that project was asking, ‘What is useful for your community’,” Jansujwicz said. “It just speaks to the value of spending time on those relationships and that communication … and I think it also speaks to the need of working with community partners to figure out what their needs are.”

For project partners Emma Brusie and Gabriella “Ella” Gurney, building meaningful professional relationships was both the purpose and a byproduct of their project. Brusie, an undergraduate political science student, and Gurney, a Masters student in communication and journalism, conducted on-the-dock interviews with young fishermen, industry representatives, and educators to record what kinds of services the newer members of that community need to succeed in their industries.

This work was prompted by the Young Fishermen’s Development Act (YFDA), which directs the National Sea Grant Office to establish a Young Fishermen’s Development Grant Program to provide training, education, outreach, and technical assistance initiatives for young fishermen and those with less experience. In preparation for when funding for the program makes its way down the pipeline, Brusie and Gurney collected, organized, and analyzed a wide variety of stakeholders’ perceived needs and compiled data on existing training programs, resources, internships, and apprenticeships to identify gaps in the support for young fishermen. They found that in-person, hands-on experience is the most important to fishermen, which they typically get from friends, family, or trusted community members. Most notably, Brusie and Gurney found a significant absence in resources focused on improving mental health, supporting diverse groups, and promoting affordable housing.

Gurney and Brusie noted that they both benefited significantly from working together on this project. Gurney had previous experience with the National Research Traineeship for Enhancing Conservation Science and Practice, a graduate program aimed at training a new generation of interdisciplinary conservation leaders, and at the outset of the internship she felt that she could tackle the project on her own. However, as her workload mounted and the project report grew beyond her initial expectations, Gurney saw the necessity in the support she received from Brusie and her other partners.

“This work completely changed my perspective on working with a team … I would never have been able to finish the 48-page YFDA report for Maine Sea Grant if I didn’t work with a team,” Gurney said.

Brusie said that the mentorship component of the internship was one of the most beneficial aspects of the program for her. She accepted the opportunity without knowing anything about it but said that it has opened her eyes to new career paths that she had not ever thought of before and it connected her with a valuable peer mentor in Gurney.

“It sounds silly, she’s only a few years older than me, but I look at Ella and I’m like, ‘I want to be her when I grow up’,” Brusie said. “Getting to work with someone who can teach you a lot but who is also still learning a lot and getting to grow together is really a neat experience.”

The Future of the Internships

Brusie and Gurney’s project ultimately exemplifies the kind of work the Mitchell Center’s pilot program was meant to catalyze. Jansujwicz said that the goal of promoting the Mitchell Center’s internships and other stakeholder-engaged opportunities is to produce a generation of scholars that develop meaningful, ongoing relationships with their communities during their research, rather than simply parachuting into a community, gathering the data that they need, and leaving without a trace. In her opinion, the Mitchell Center is the perfect home for this.

“The basis for wanting to do this kind of work is to create these lasting partnerships, knowing that these issues and questions aren’t solved in a semester, course, or degree program,” she said. “We’re hoping that it’s going to give multiple students the opportunity to work in these different contexts.”

In addition to seeing the number of community partners associated with the internships grow, Jansujwicz and others leading the program would like to see future iterations provide more professional development for interns and more opportunities to interact and develop a sense of camaraderie as a cohort.

As for the interns themselves, some have already reaped professional and academic dividends from their experiences. As a direct result of her internship, Dowley found a position with the Maine Department of Inland Fisheries and Wildlife in its Beginning with Habitat program, where she will using the same skills that she developed over the summer as she supports mapping for municipal comprehensive planning across the state. Meanwhile, Brusie shifted the direction of her academic career because of her internship experience, changing her major to Ecology and Environmental Science with a concentration in Environmental Policy and Resource Management. Brusie will also continue working with her project partner going forward, this time to support Gurney’s master’s thesis.

“I’m really, really thankful to this internship for showing me something that I can take with me for the rest of my life,” Brusie said.

If you are interested in participating in the Mitchell Center’s internship program as a partner organization, please contact David Hart.